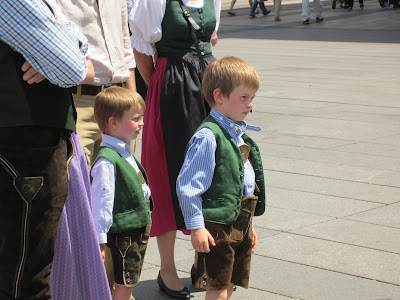 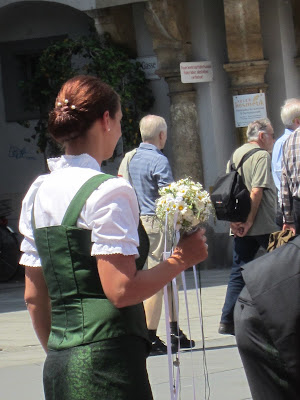 This is actually a blushing bride!!  Tradition in Austria must call for something old, something new, something borrowed, something blue AND a green wedding "gown". She and groom took off from the church in a little red Smart car! 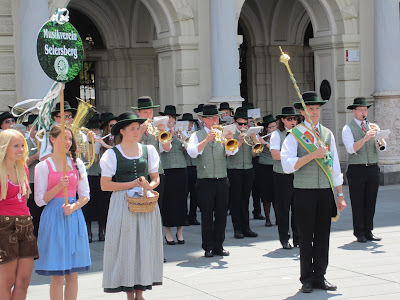 A Saturday afternoon marching band.  Check out the blonde  to the far left.  I'm thinking her friend blue dirndl said, "Look, you have on leather shorts at least!  Come stand by me!  It'll be ok!" I know how kids work. 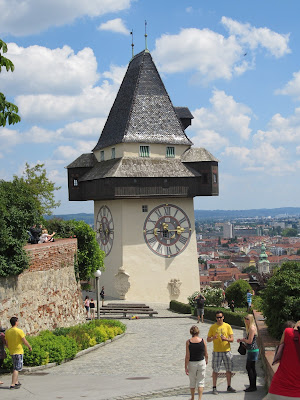 We took an elevator to the top of this steep fortress.  Fortification is a big European deal.  The shift to a democracy in America did away with castles, moats, and other manifestations of "Get out and STAY out!"  I wouldn't mind a moat or two around my property.  You? 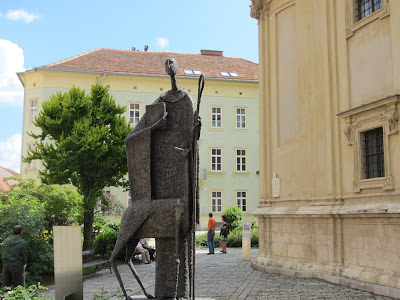 A saint.  Not of the latter-day variety.  He appears to be the guardian of long-legged beasts and perhaps overdue library books? 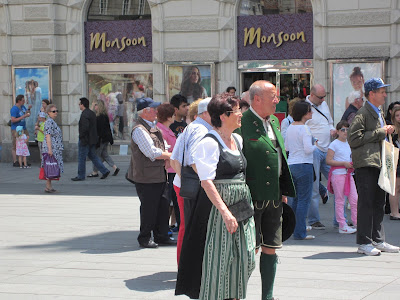 Several of these types of colorfully-costumed couples were adding to the general festivities of Austrian streetlife.  I had Paco believing that the city fathers had assigned a "If your last name is A-G, wear your costumes and stroll on even Saturdays.  G-Z take the odd ones."  Sort of like how we make church cleaning assignments.  He BELIEVED me!!!!!!!!!  I laughed til I was sore.  And where would I have picked up that information??????  It was at this point that I concluded we needed to add some fruits and vegetables to our cheese/bread/yogurt/chocolate heavy diet to clear our heads... 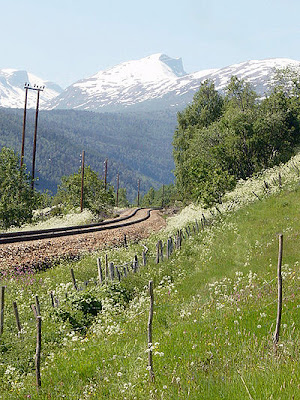 The train trip to Graz was worth the whole day trip!!!!!  Jaw-dropping.  Ever-loving jaw-dropping. 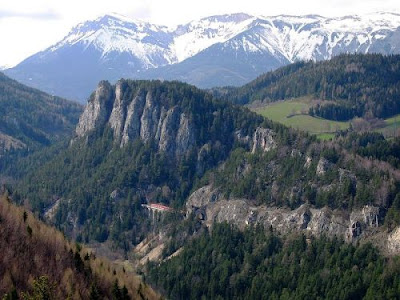 Yeah, what I said about the jaws. 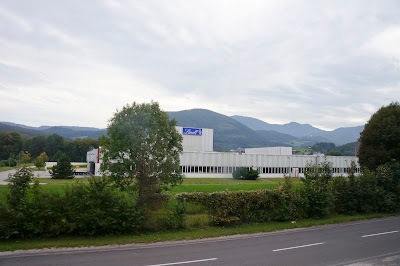 I genuflected as we passed this Lindt factory.  I wanted to hop off and rummage unabashedly  through their dumpsters! 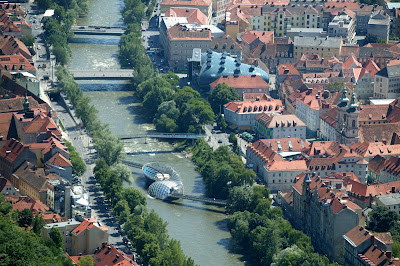 Graz as seen by a passing bird to whom I loaned my camera. 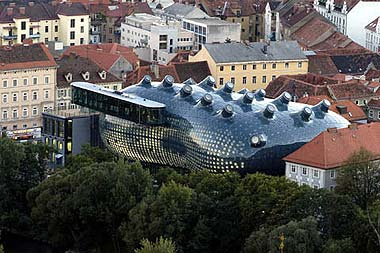 The Graz KunstHaus.  Isn't it something?  (Jack Taggart paid good tuition money for me to learn that Kunst = Art, and Haus is...well, house.) 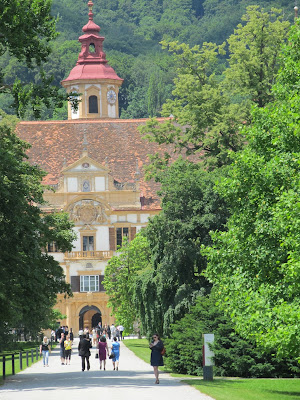 Okay things kind of started to break down a little here--although, we're not at week 3 yet.  We found this in a pamphlet and took the bus out to find it.  I wanted to go in, but Paco balks at paying unnecessary admissions.  So we took this picture and left.  For all I know it was full of original Picassos and Monets..  But for chocolate which he withdrew from the backpack, I would have protested.  Now that I'm sitting here looking at it, I'm getting dang mad that I let him...moving on. 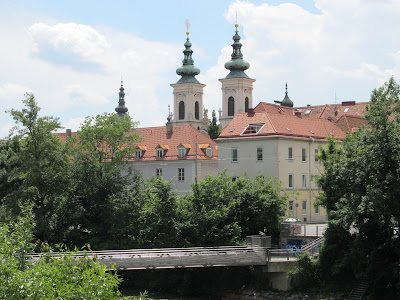 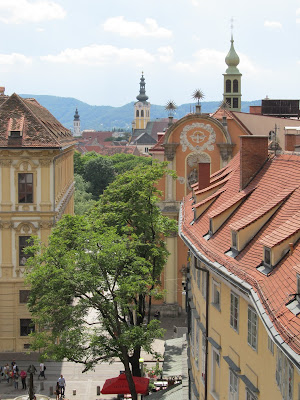 I don't stop on the streets of Mt. PotatoPeeler and take pictures.  Ever.  But in Europe, you just do.  Everything is like a picture in a book.
Posted by Mad Hadder at 1:40 PM

I came back to show John the mysterious doggie doo message and found Graz. Wunderbar! Lederhosen, amazing views, and a Lindt chocolate factory. Oh my! (He thinks it's local vernacular for Wo sind wir daheim, meaning Sheesh, do you do this at home?)

That unnamed, unvisited baroque building looks a lot like Melk Abbey. If so, Paco owes you big time. It is the finest example of baroque architecture north of the Alps and also has great historical significance as the center of the counter-reformation--it is why Austria is Catholic and not Protestant. If it isn't Melk Abbey, then never mind.

I would have given my right arm to witness Jerry believing you on that joke!