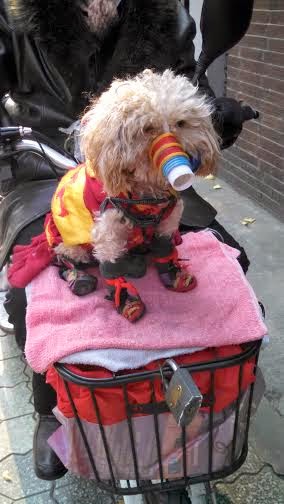 "and to love you."  During my one month hiatus in the U.S., our neighbors and fellow conspirators, the Criddles, took this picture and sent it to me. It tickled me greatly.  Every well-dressed dog in Chengdu is fully attired with a smashing coat, but THIS guy!!! He adds boots (on second thought, it looks like they're trying to BIND his feet!) AND an air filter device which puts him in a category all by himself!  He gets a front seat on his master's scooter and a spiffy clean pink towel to boot!  Truly, China is cutting edge...
Posted by Mad Hadder at 6:15 PM 1 comment:

I wish I could fill this post with a fantastic story of being taken captive into white slavery, loping by camel pursued by enraged Bedouin captives, crossing the Gobi Desert to escape--eating only raw rodents and boiled rocks--and just BARELY living to tell the tale!!!!!  I would finish up out of breath and wide-eyed (much like a kid who arrives home from school two hours late) with: "And THAT'S why I haven't posted."  The real story has much less pizzazz--but is NOT without its thrills!!  Actually, I've been on the road.  The story will unfold over the next few weeks as I catch myself up--reminding any readers yet again that this blog is my chronicle.  I write it basically for myself.  It serves as journal and my attempt at "generativity-ing" (maintaining oneself with a sense of optimism expressed through efforts to pass on what he or she has learned in life to the next generation--Master Class by Peter Spier, which I am reading at the moment.  Anyone over 50 should make a BEELINE for this book!!!!!!!!!).  Here's a teaser:  Shanghai, Los Angeles, San Francisco, Salt Lake City, Bear Lake, Hong Kong, Guangzhou, Hanoi, Siem Reap (Cambodia), and Saigon.  Whew...I have pictures, and I'm sure a running commentary will surface.  For now--a sneak preview!


Today is Chinese New Year's Day!  We celebrated the Eve in our home with a student friend, his mother, and visiting cousin from Beijing who brought with him a Peking duck!!  They also brought traditional dumplings which Grandma had whipped up and sent along.  A real feast to which we added our fried potatoes and vinegar cucumbers upon request.  Good times.  Today is quiet--ghost town.  Chinese return to their homes for New Year's Day, which means the country for the vast majority.  Paco is going out to do "reconoissance" to see if signs of life can be found.  On the domestic scene here--we are now hauling dishes into our shower to rinse them (as we shower ourselves!) because our kitchen hot water is a thing of the past.  AND last but not least, 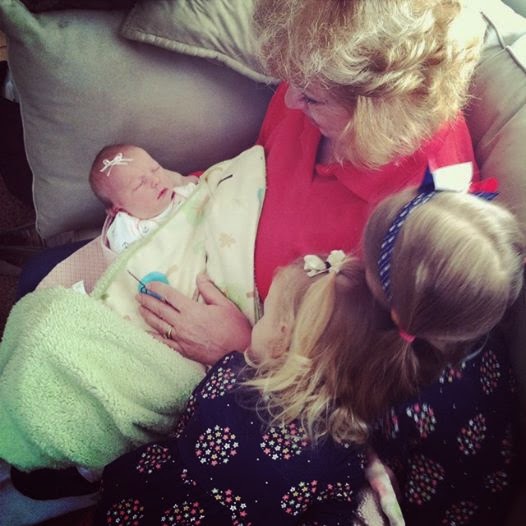 a hearty welcome to Norah--our latest and greatest granddaughter born on Valentine's Day in Provo!  She makes an even 10--but only for a few weeks!!!!