I intend to fill this blogpost with NO pictures.  It will literally amaze you--all the pictures I'm NOT going to post!!  I recently committed to one post a day for a week.  That was a bold move., made even bolder by the fact that I was going to be away from my computer for four of the seven days because I was 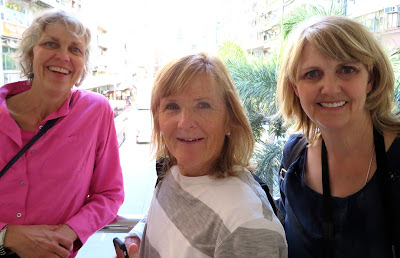 off and about at the Asia Women's Conference with these good good friends!

That goal makes no sense at all now.  Sometimes I hang myself with my own self-imposed challenges.  I hear the sirens in the distance coming to arrest me for that infraction and drag me screaming off into the Beijing sunset.  I can imagine that a Beijing police station is on par with other public building encounters I've had in China.  On the edge.  I heard a hilarious account the other day of an American who had to produce a urine sample in a Beijing hospital in the first days of her arrival here.  Tiny tiny cup.  Aiming over a squatty potty.  Here.  I'll NOT post a picture of it!


They say deaths come in threes.  If there is one, there are usually two, and if there are two you don't usually rest easy until the third has been announced.  I have had a series of three "episodes" in the last week. #1 Here's NOT a picture of my friend Nina NOT meeting me in the Hong Kong airport.  She was late and thought that I had left.  Our phones don't work in Hong Kong.


Here's NOT another picture of me throwing my phone against a wall.


I had a bus number to take from the airport and an approximate time that the trip would take--50 minutes.  No exact stop.  So I boarded and then nervously looked on my left for the Hong Kong Temple after about 50 minutes. It was dark. .. It was Hong Kong. When the temple lot flew by my peripheral vision, I pushed the bus stop button and leapt off when the bus stopped.  Here's NOT a photo of me forgetting my suitcase.


Nina met me a little ways up from the stop.  Here's NOT a picture of her heroically chasing the bus down.  As you can NOT see, she was not successful.  The next day I called the bus terminal 8 times.  They finally told me my suitcase, Mr. Polka Dots, was "touring" Hong Kong in a van, but I could meet it back at the airport between 11 P.M. and midnight.  What the???  Here's not a picture of me paying $50 for an Uber car to go back to the airport!!!! 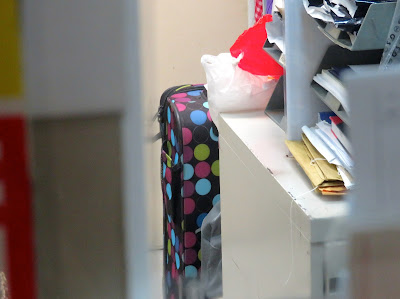 But here IS a picture of my suitcase after its harrowing 24 hour Hong Kong fiasco.  It was an emotional reunion.
#2 After my four days in Hong Kong I arrived back in the Beijing airport around 10 P.M.  Because I am usually in my jammies usually no later than 6 P.M. most nights usually, I had no idea that the subways closed up shop at 11:30.  By the time I got to my last transfer the gates were closed.  I wandered around for a while underground trying to find a way out.  I only had a few Hong Kong dollars in my purse because I had converted (dumb, I know) my yuan for the trip, so I figured I'd walk.  Midnight.  Alone.  On the street dragging Mr. Polka Dots--  Here's NOT a picture of my knees sort of knocking.  Note:  Paco was away for the weekend in Tianjin.

THIS guy (NOT pictured)

had pointed me north when I stopped to ask directions..  I'm walking.  Dragging.  Getting a little nervous.  Beijing is just so, so... so... big and Chinese!!  I sent up some prayers.  Right then and there.  AndthenataxipullsupandrollshiswindowdownIkidyounot!  I show him my HK dollars.  He examines them like they're remnants from King Tut's tomb.  Here's NOT a picture of him fondling the money.

He motions me in, and then I'm home!!!!  I tried to convince him to wait while I whisked up the stairs to my apartment and got yuan.  He waved me on and made his angelic departure.  I take back every rotten thing I've ever said about Chinese taxi drivers.  Honestly I do.  Here is NOT that kind kind man.

#3 Tuesday was International Women's Day.  The foreign female teachers from the language department at Peking University were invited to the Great Hall of the People on Tiananmen Square for a festive event.  Here is NOT a picture of me dressed up for this gala event.

Here is NOT our whole busload of ladies arriving at Tiananmen.

And here is NOT a picture of me discovering I forgot my passport and trying to sweet talk my way in.  The Chinese guards would have none of it.


Here's NOT a picture of me taking the subway home all by myself.


I feel better.   A NOT picture is worth way more than a thousand words, right?