Life is Grand in the Tetons! 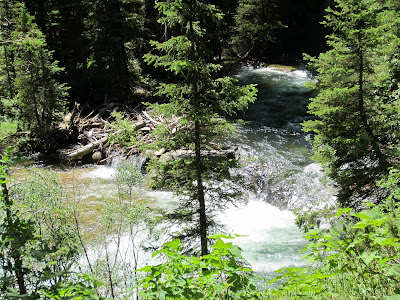 Somewhere deep inside every man lives a beautiful place. My beautiful inside place looks exactly like the Grand Tetons. 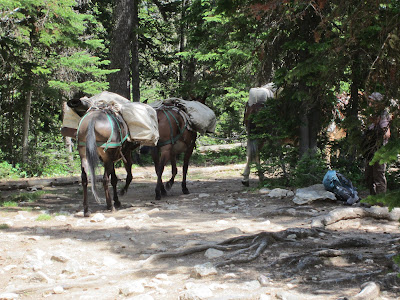 Sometimes you just have to pack up the mules and head out. 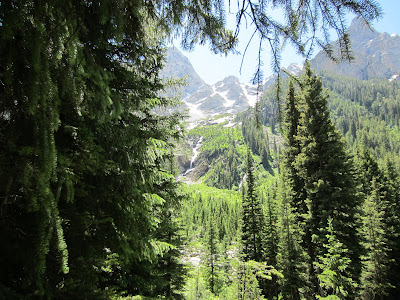 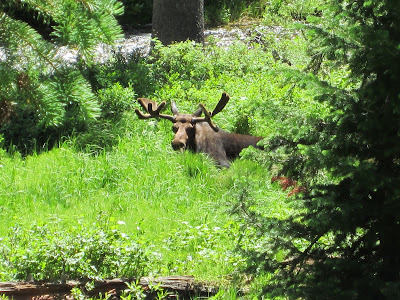 And the magic just never stops--around every corner, something majestic or maybe just a moose cooling his belly in a stream. Or a smudge of a black bear up on the side of the mountain turning over a log in search of bugs. 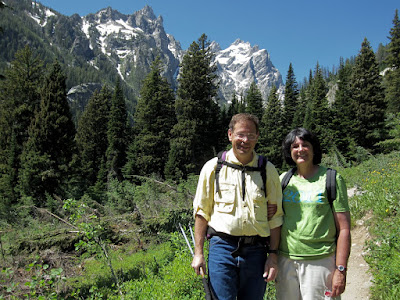 The John and Martha Taggart reunion only rolls around every other year. This year's event included a day in the woods and a night (if you were up to it). We painted rocks and ate out of ovens--Dutch style, even though there's not a Dutch gene in sight. 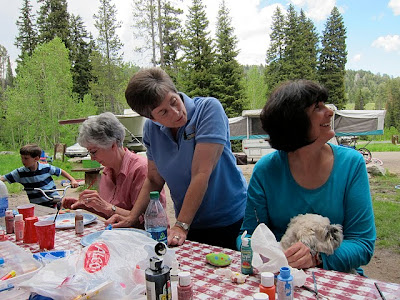 My sisters and myself. 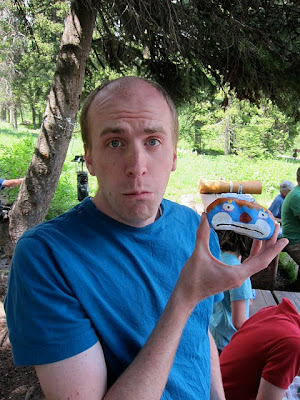 My nephew Jack and his clone clown! 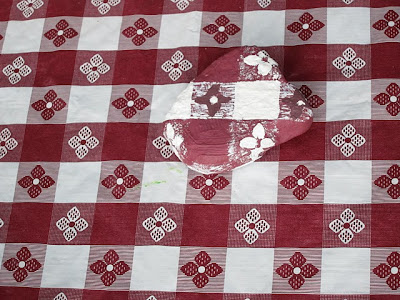 Thomas tries his hand at a camouflage rock. Cool. 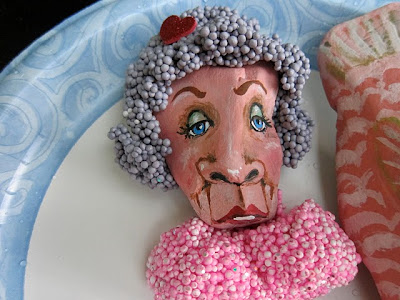 My over the top sister-in-law, Marilyn, did THIS with acrylics, bad bad brushes, and a rock. Oh and some foamy stuff she found lying around. Extraordinaire! No? 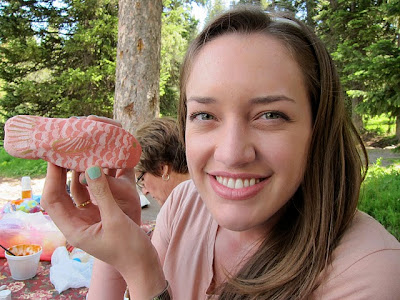 Nephew Jack's wife, Jo, seems to have married into the right family! 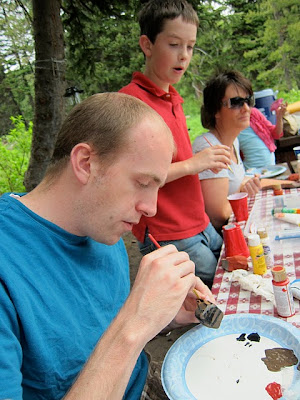 You Know You've Arrived When... 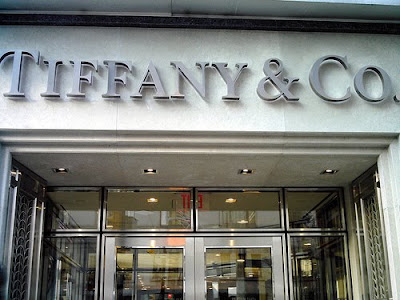 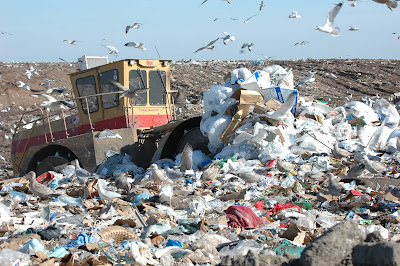 Apparently we're "regulars" because when we pulled in this morning, Paco merely paused to be weighed and then headed on in! It felt so posh! Apparently our vehicle is allowed to bring in 4 tons a year! Let's see 4 tons times 7 billion...put down the one and carry the...sheesh. Mugsy and I could NOT resist making up a "Going to the Dump-pa-da-dump!" song! I remember going to the dump with my dad. He'd back up dangerously close to the edge, and I'd squeal! And then in the winter, the dump road was our favorite sledding hill. My friend Denny had an old refrigerator door we'd all hop on! Somebody's dad would haul us up the road, and down we'd barrel! Chili and hot chocolate at somebody's afterwards...do kids still do this???? I had a missionary friend--he became an attorney I think--who had a job at the dump in Salt Lake City before his mission. Oh, the stories he'd tell. I'll bet he had more fun there than he's having as a lawyer. I'm thinking my grandkids would love a trip to the dump some time! I know I'm going back again! "Where everybody knows your name! And they're always glad you came!" 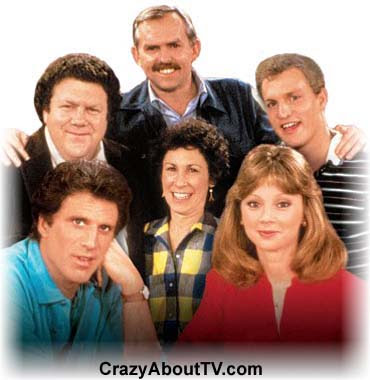 and singing this song. On our desk here sits a picture of Paco--arms widespread (maybe he's telling a fishing story) to a group of diminuative Hispanic first graders. And thus began and ended the first chapter of Teach For America--Paco-style. 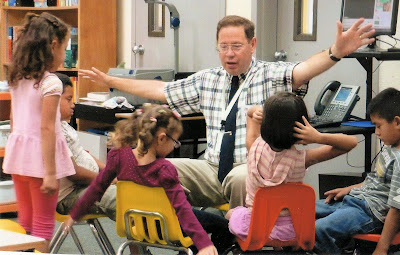 I heard a large-framed bearded dude tell the clerk at Maverik this morning, "I don't use pennies. I save them. I'm the reason there's a shortage, but that's how I paid for my Harley!"

Speaking of Maverik, the Maverik cat was found!! And you didn't even know he was gone. I'm thinking of interviewing him--he being so notorious and all.

I'm reading The Sociopath Next Door, and now everyone I meet is suspect. 1 in 25 of us is devoid of conscience, you know.

My high school classmates are showing up here for a bonfire next month. Rocking good time.

Mugsy had a "sex change" a few weeks ago. I got up early and just took the scissors to his top notch. He's easier to pet now, and I think his manhood has been boosted.

I dropped into 17 Miracles on Saturday. Have you seen it? I got a little drowsy and woke up at one point with a big old SNORT!! So demoralizing. LIKED the movie!!! Travis, my nephew, is a Star in it!! I love the scene in which the wolves drag him off to a hollow log. It's bordering on Monty Python-esque!!!! "I almost poked his eye out!"

Our alpacas,The Philosophers (Aristotle--"Ari"; Thoreau--"Hank"; and Emerson--"Ralphie"), have been displaced for a few days while the weed spray does its magic out there in their field. Paco rigged up a bit of a Cat's Cradle to keep them penned into our "sideyard". They jumped the fence and took to the high road! But they're such gentle souls that they willingly let us herd them back in. Here I would have inserted pictures of such, but I left the memory card in the printer! Why doesn't my camera SCREAM or SHAKE or at least clear its throat when the memory card isn't in it???????????
Posted by Mad Hadder at 12:42 PM 1 comment: 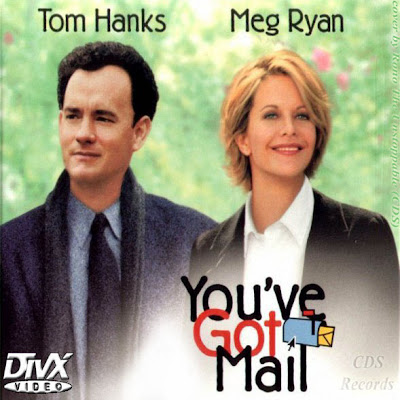 Say howdy,
We'll ignore my complete disregard for this blog. I wouldn't exactly say I'm lazy. In my garden and the proximal regions you will find 13 (I counted them!) waist high mounds of weeds. I know I tend toward the boring when I harangue about flies and weeds. "ENOUGH ALREADY WITH THOSE!!!" I hear you shout. I'm just defending my work ethic. I have some interesting (yawn) pictures to post to fill in the cracks in the past almost month. In the meantime, I'm pausing reverently today to pay homage to my all-time favorite movie, "You've Got Mail" and to entreat you to join with me in putting this video to rest. Today I popped it in, settled down on the couch with a sweater I'm knitting, grabbed a handful of Jelly Bellies, and adjusted the dog at my side. But alas and alack, the tape is apparently just worn out. WHAT? Youmeanthesetapesdon'thavea10,000milesguarantee? I tried adjusting the tracking, cleaning the heads (I realize these are all antiquated terms now) with a head cleaning videocassette, and I even rigged up a Q-tip dipped in alcohol device which I attached to a pair of bamboo tongs in an attempt to clean the heads. Then the sound got slower and slower until Tom Hanks sounded drugged out of his mind! I tested the VCR with a Christmas with Mr. Bill video. Clear and clean. I admit defeat. Out to pasture it goes. This movie came out the year Paco and I got married. It has many elements of our courtship and early marriage--internet, anonymmity, children's books, NYC, and I dearly dearly love it. From the first time we saw it at the Ben Franklin Outlet Mall I was a die hard fan. I remember insisting it be the first movie Shelly watched when she returned from missionary work in Japan. I imagine I've watched it nearly 30 times--sometimes back to back. The only movie that can even come close is When Harry Met Sally--a blogpost for another day. A Meg Ryan and Nora Ephron junkie I admit I am. I'd better hoof it over to amazon.com and peruse replacements. Anybody else out there worn out a movie???
Update: $4.69!!!!! Brand new deluxe anniversary dvd edition delivered in two days. Ahhhh...
Posted by Mad Hadder at 5:39 PM 6 comments: