Not ONE Not TWO But THREE!

My local library (which I've haunted off and on for nearly 50 years now) is sponsoring a simple reading contest which ends on April 1st. Fool that I am, I've put myself into reading mode--up late reading, up early reading, grabbing minutes throughout the day, carrying a book any and everywhere I go. I'll post my list of favorites once this is finished, AND hopefully I'll win the Kindle! So far...mmmmmmmm...it's all been deliciousl.

I spent a few days recently in Chicago visiting a lab high school. I've been involved in an academy at BYU for nearly two years which seeks to educate principals in best practices for school leadership--specifically Professional Learning Communities. That all led me to Chicago. I ought to post about my time at Adlai Stevenson High School. Perhaps. But on the lighter side of that trip...I witnessed something in Chicago's Midway Airport that I have NEVER seen!!!! And I saw it NOT ONCE, NOT TWICE, BUT THREE times!! I saw THREE different people at THREE different times on THREE different moving walkways FALL!!! Flat on their faces as they stepped off! Yikes... I ran right over to the first portly older woman. She got up and brushed herself off--assured us she was OK. The next gal limped a little. The third man moved to the wall and stood while his wife pulled up his pantleg and checked for injuries. My strategy is to stop the last few yards and coast before I get off. 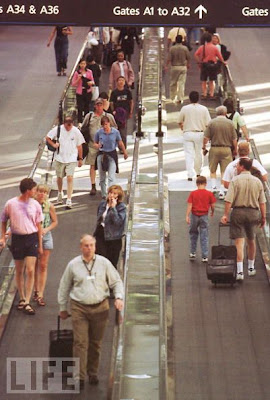 From an email of one of my adorable students: i love animals it doesn't really matter what kind i just love helping them. once i was riding my bike home from school and i saw a pigeon on the side of the rode. it couldn't fly so i picked it up and carried it six miles (all the way home) i gave it pieces of bread and water, and in the next two days it flew away.

"Allelujah...Never Knew Ya" This in from Bruce. It came from Ben's school.

Farm Report: We just received word that Margarita (our adopted alpaca who still lives in Oregon awaiting her pick-up) gave birth to a handsome male cria last week!! Our camelid herd is growing! Their spirits don't seem to be dampened by yet more snow as I write this. We've been hosting deer in our perimeter all winter--their choice not ours. At the same time we've kept our eyes peeled for a wandering moose who stomped my friend Annette's poodle to death!! I KNOW!

Some of my genetic extensions have been whooping it up in Florida. I guess that could be called balance. Last night my knitting group unraveled a bit. Some were out of town, some opted to view the BYU wake. The Arctic Circle was designated for leftover knitters. None of those but myself as it turned out, but I did meet up with my goat cheese friend and her daughter. Remember her 10-year-old son Trey in your prayers and mediations. Trey is severely cerebral palsied and had his leg broken in the push and shove of school last week. He's off to Primary Children's Hospital today because of his obvious pain. She told me Trey's job at school each day is to "check" the writing of the pre-schoolers and give them a thumbs up or down. To say that they love him is an understatement of epic porportions.

Paco is on a run today to scope out supplies. We're putting together plans for a dog hotel/kennel. Hopefully we'll attract a few Denver-like dogs.

On a sunny free morning during my Chicago trip, I hastened to the Lincoln Park Zoo. As I was standing with a group at the hippo lair, I said casually to a woman and young girl next to me, "I wonder if these hippos are social." The woman responded, (a little snippily for my comfort) "Perhaps one of the zoo docents can impart that information to you." Impart indeed...

Posted by Mad Hadder at 5:08 AM No comments:

We're still in the midst of winter here. In fact, I'm postulating that winter has JUST BEGUN! I, on the other hand, subscribe to the Dark Ages theory that in addition to having a limited number of sneezes, hiccups, and breaths per lifetime, we also have a limited number of days per year to wear winter coats. And my number has apparently run out. No more coats for me. Ever. Not even. Again. Until next year.
Posted by Mad Hadder at 4:48 AM 3 comments:


For all my sadistic readers who just love it when I'm up in the night, sleep eluded, sneaking biscotti and apple juice, pondering the apocolyptic fast-approaching end of life as we knew it, hunched by the space heater, peaking through etsy.com, and rubbing my finger over all the dust on this desk. Picture me giggling at this video too. The female bird painter is a dead ringer for Christina in my knitting group!!! And she's from Portland too!!!! Unfortunately transferring clips from youtube shrinks them a bit, so you don't really get to see the charming gagging she does so well.
And while I have your attention, can I just say that going to Border's in Logan on Saturday night was oh so the saddest of occasions. They're closing! (she wails as she dabs at her eyes and snorts into a hanky) Yes, they're closing. Now the aisles are littered with books flung aside and stuffed animals facedown (I DID pick Olivia up gently and smooth her dress before I set her back on the shelf...) as FURTHER rude evidence that people are truly barbaric by nature for the most part. And those ghastly 25% off/Store Closing banners! 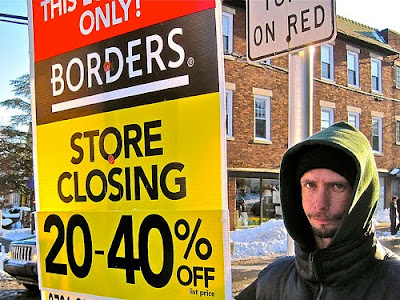 Why didn't they just suspend old ladies upside down from the ceiling instead? Or pictures of spider ice cream? I shuffled through absentmindedly humming the funeral dirge. My sanctuary where I had previously transmutated if only for a brief time hours and hours and hours on end has now become Filene's Basement. And then it will resemble GoodWill as the prices drop and drop, until at last, the store will sputter as it runs out of gas, closes its doors, and joins the ever-growing number of vacant storefronts across our great decrepit country, yet additional unqualified evidence that decency is slipping slipping slipping... And should you still mistake me for Pollyanna , let me hasten to add...Big Brother will have to PRY MY TRADITIONALLY BOUND BOOKS OUT OF MY BLOODY-STUMPED DEATHGRIP!!!! (Incidentally, yes that IS me in front of Border's. I'm growing facial hair in protest.)
Posted by Mad Hadder at 2:35 AM 4 comments:

Blessed Are the Cheesemakers...


I milked a goat today at a friend's farm. Her (the goat) name was Peaches. She lives with 8 other goats, 13 rescue horses, 1 llama, 10 chickens, a rooster, and the memory of a recently dispatched duck. From all observances she grooves on Brrrr Lake farmlife. After all 4 goats were milked, we attempted cheese--gouda and mozzarella back in the kitchen. As with most things that you think must surely be effortless (spinning, riding a horse, getting alpacas in and out of a trailer, catching a llama, turning 8 acres into a hobby farm etc.) cheesemaking takes skill and precision--both of which alluded us today. We were supposed to heat the goat milk to 90 degrees. We hit 130 toot sweet, so whatever would have made the milk curdle I think we pretty much fried. On to mozarella. That went better...until we added salt after the second trip to the microwave with the elastic-like ball. The ball turned to hmmmm...think mashed potatoes with a rubber ball melted in. Or semi dry Playdoh. We theorize that the salt did that. Back to the drawing board. But it tasted wonderful. Elaine took it home and was going to add it to salad or something. Some sort of dish that would call for crumbled cheese. When we left, the gouda was still curdling. I'm guessing it was history. "The gouda was no gooda." At $6 a gallon, Paco is suggesting that we make fromage de chevre--goat cheese--sparingly. 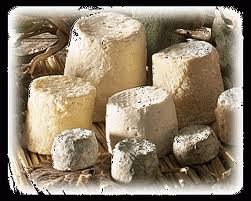 One gallon yields just a little old ball once all the whey is extracted, so that may be a luxury. No where to go but up. We here at Grab a Teat Acres know all about up because we are always trying to look there.
Posted by Mad Hadder at 11:53 PM 2 comments: 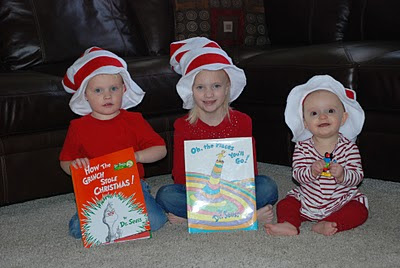 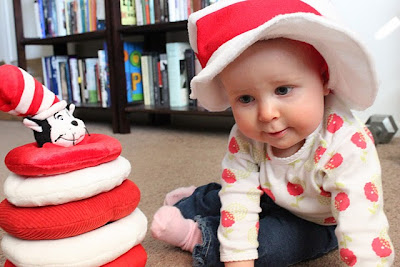 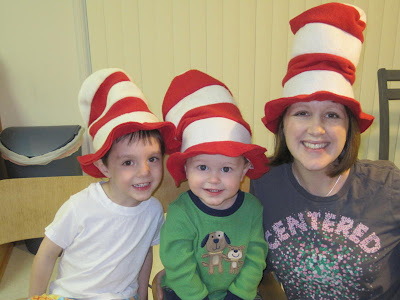 What you can't see is the itty bitty bitty little Cat in the Hat hat on my daughter's new baby girl coming in May! Boy was that tricky getting it on her! I'm sitting here in my Cat in the Hat suit--I think this is year 13. The problem is that I get less and less of a reaction which is so not good! I think I may have to retire this year. It's been a good run. One girl said she hadn't even noticed that I was wearing it! Come on!!! The only slack I can possibly cut her is that she'd been to a funeral. I mean really...
Posted by Mad Hadder at 6:24 AM 4 comments:

Posted by Mad Hadder at 8:58 PM No comments: