A Face In the Place 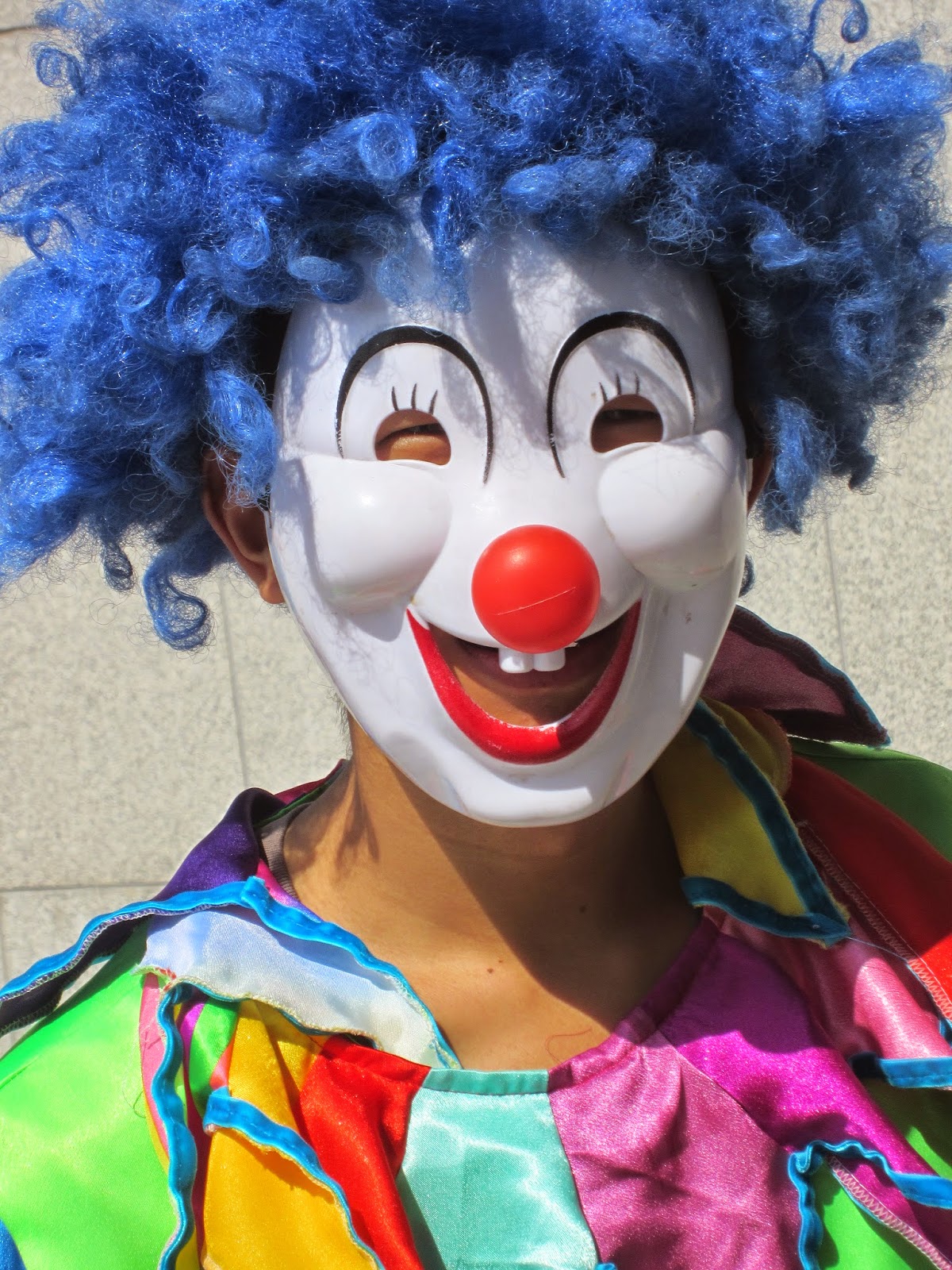 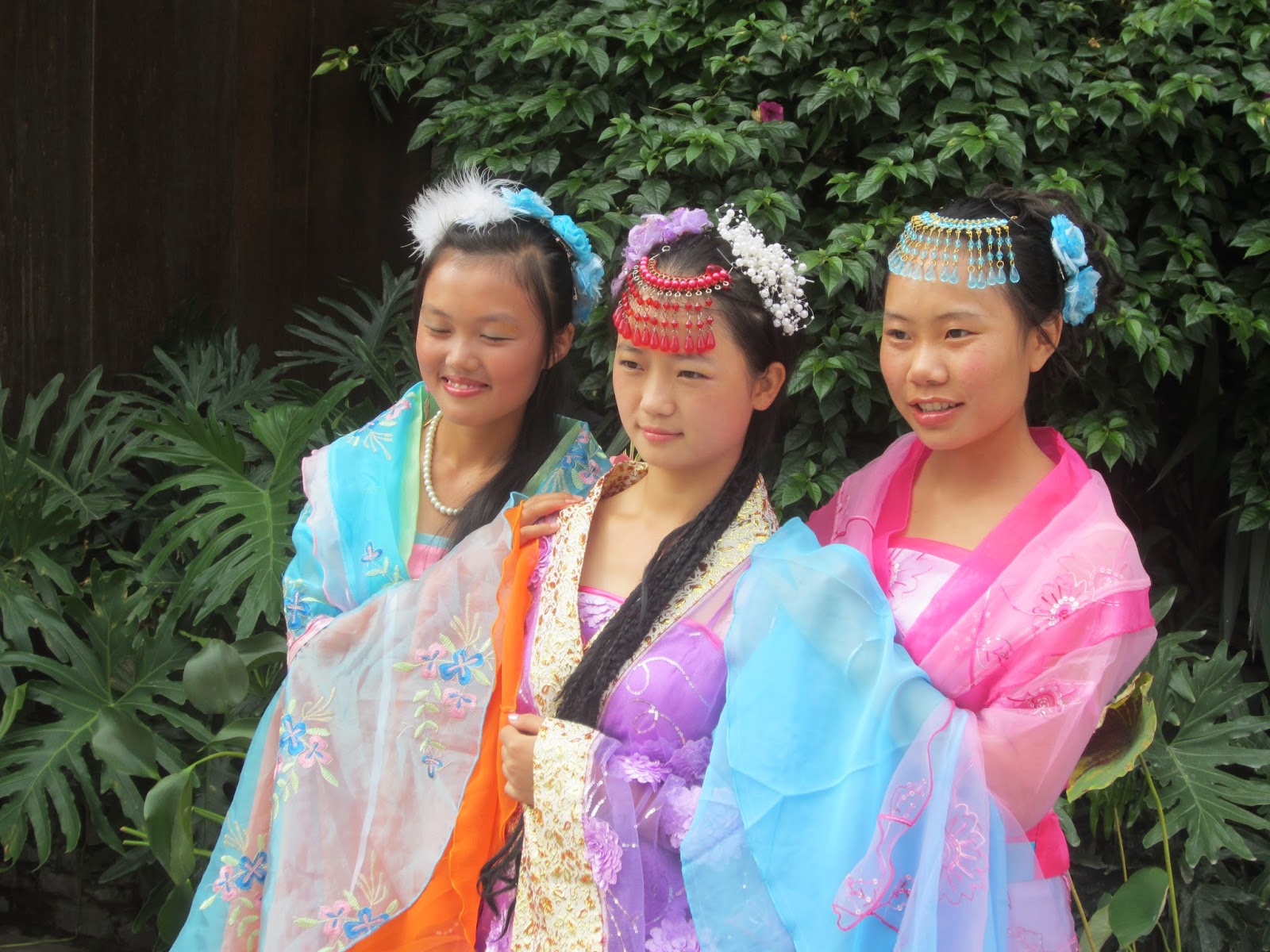 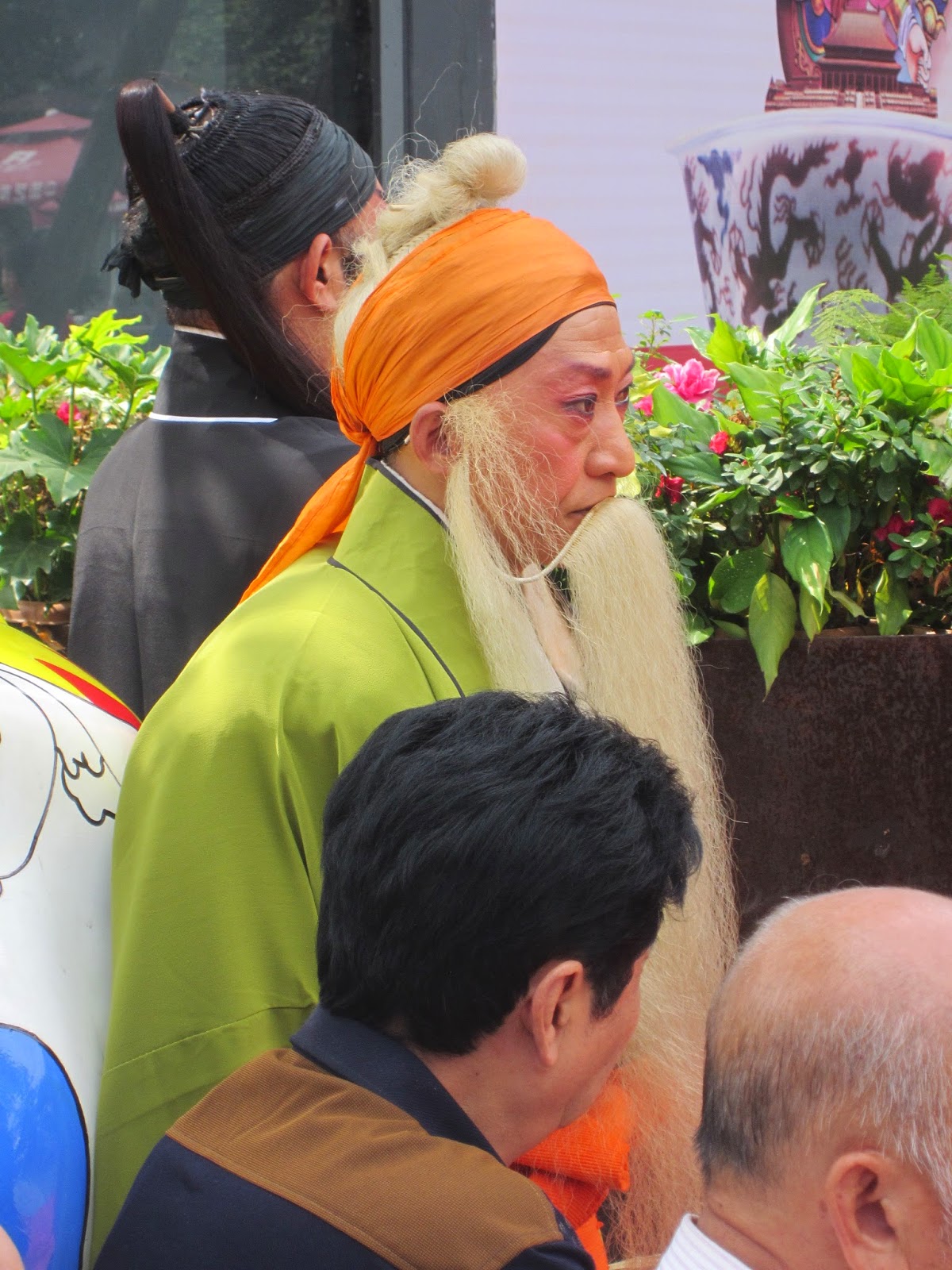 This gentleman was part of a stage celebration with singing and dancing that we chanced upon while visiting an ancient city near Chengdu. 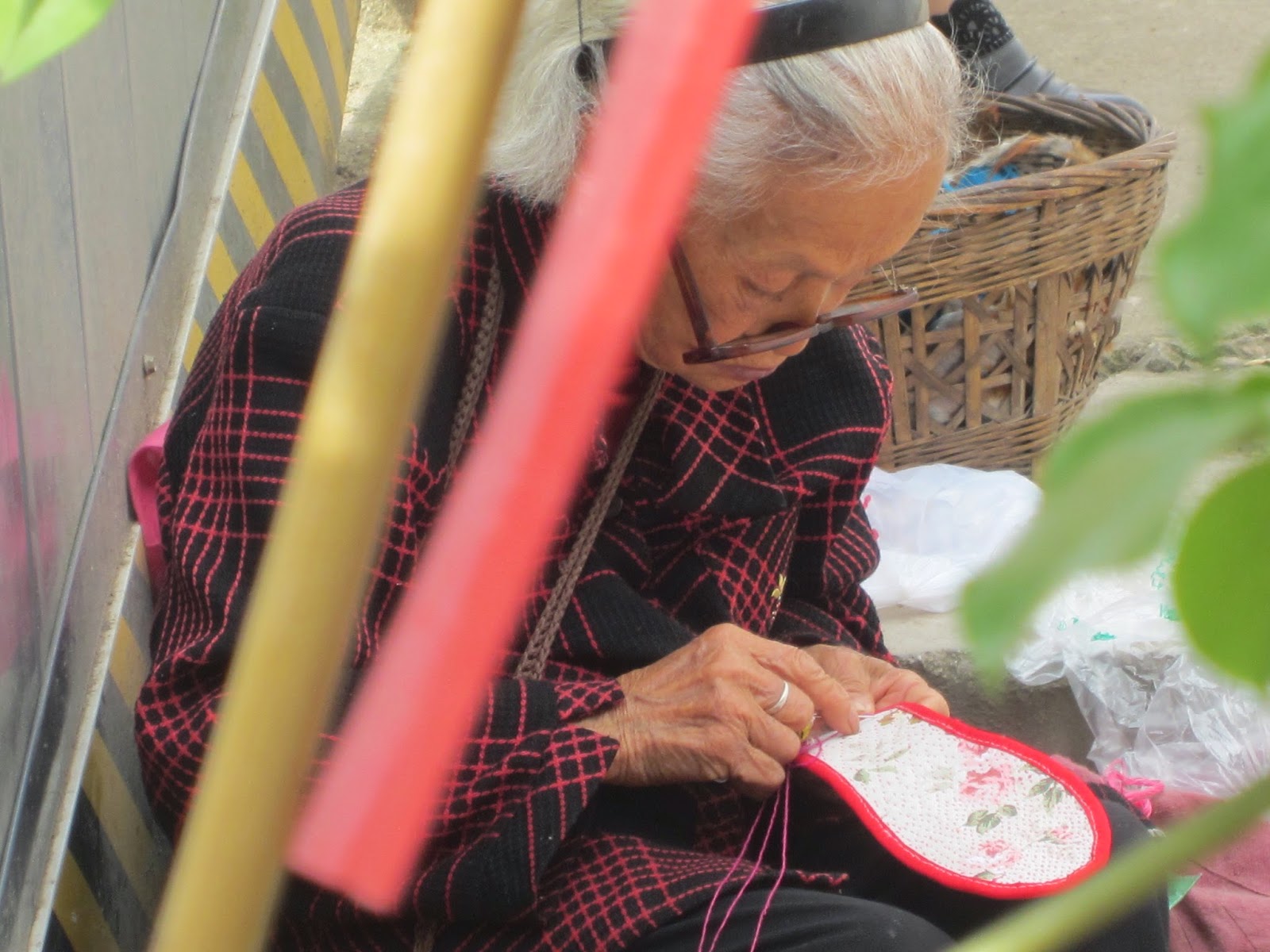 This good soul was sitting quietly off by herself on a shoulder to shoulder crowded street market.  I semi-sneaked up on her.  She is doing handwork on some house slippers.  We see hundreds and hundreds of women relaxing on the street doing needlework. 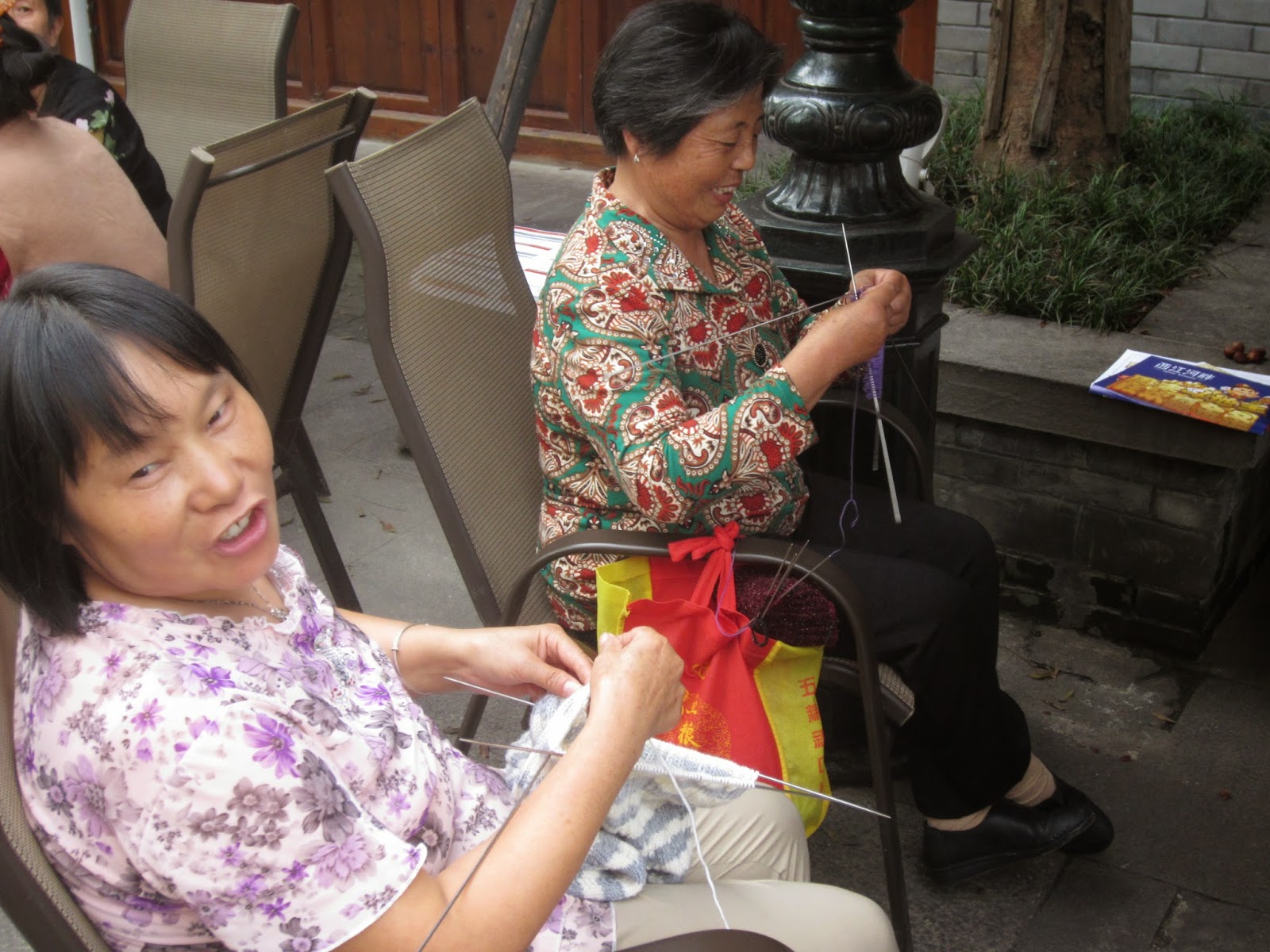 And now that the weather is finally cooling, the knitters have come out of hiding!!!  I knew they were out there! 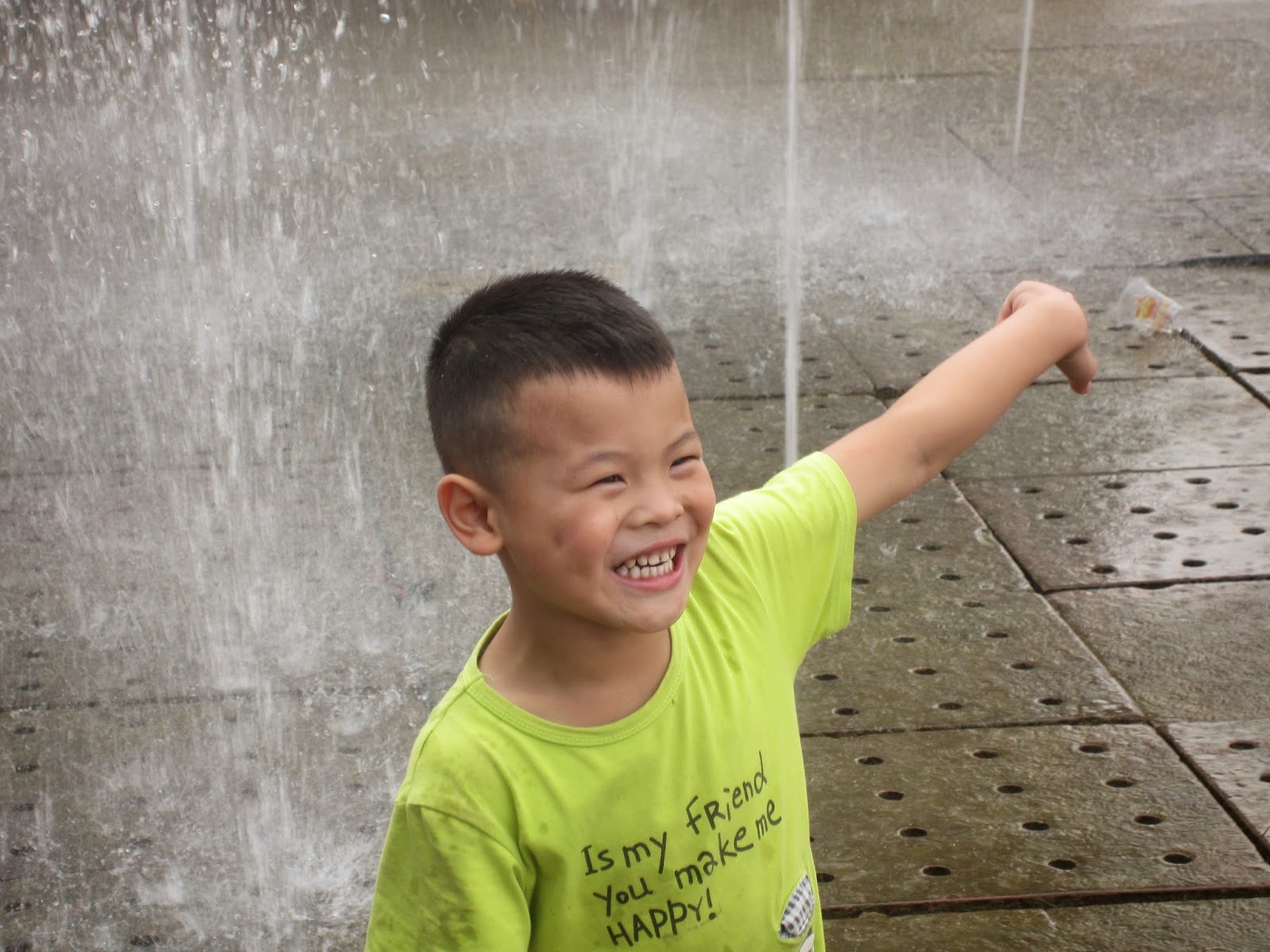 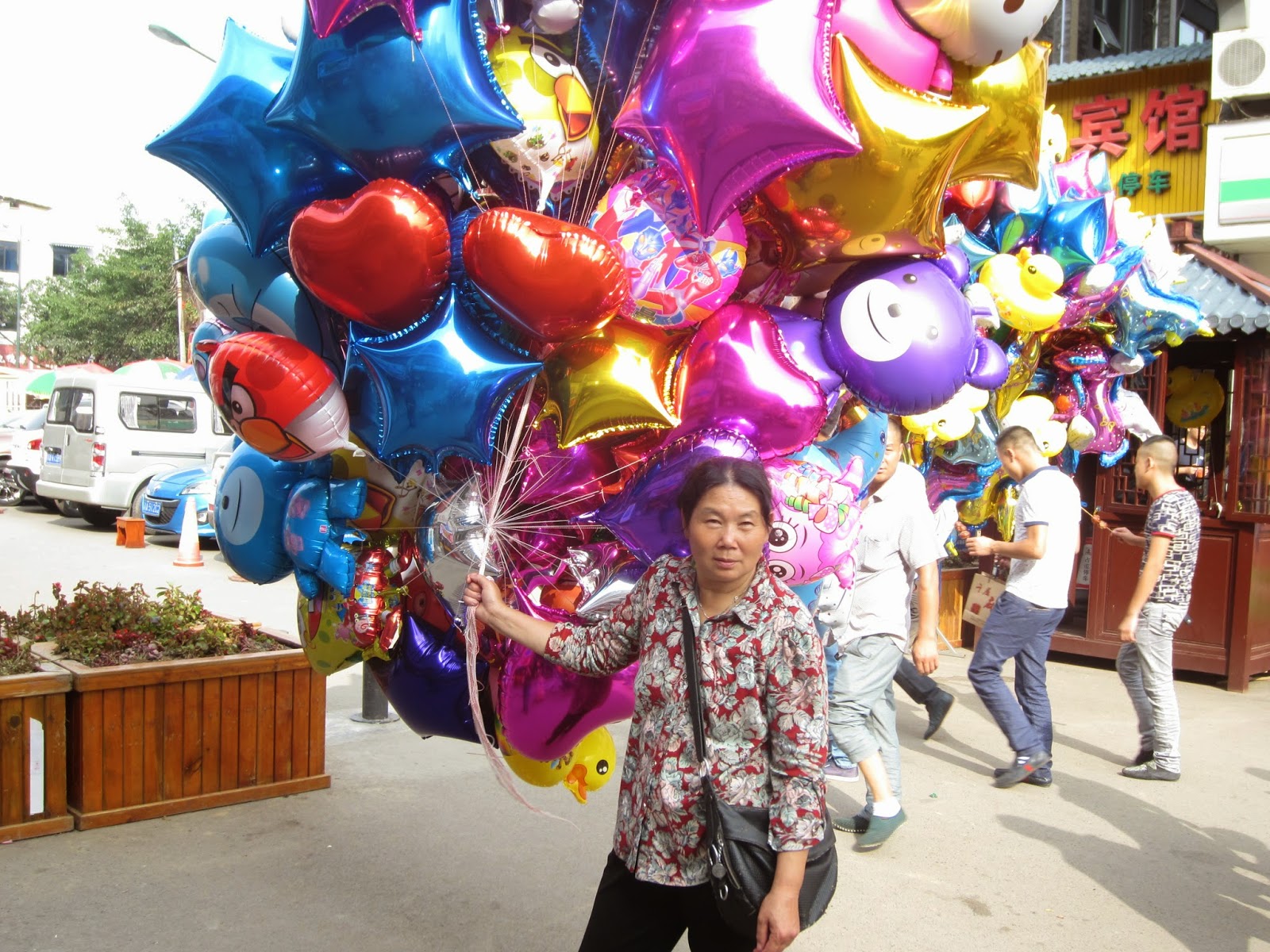 In my next life, I am going to campaign for THIS job!  She probably doesn't know how much fun she is actually having, however. 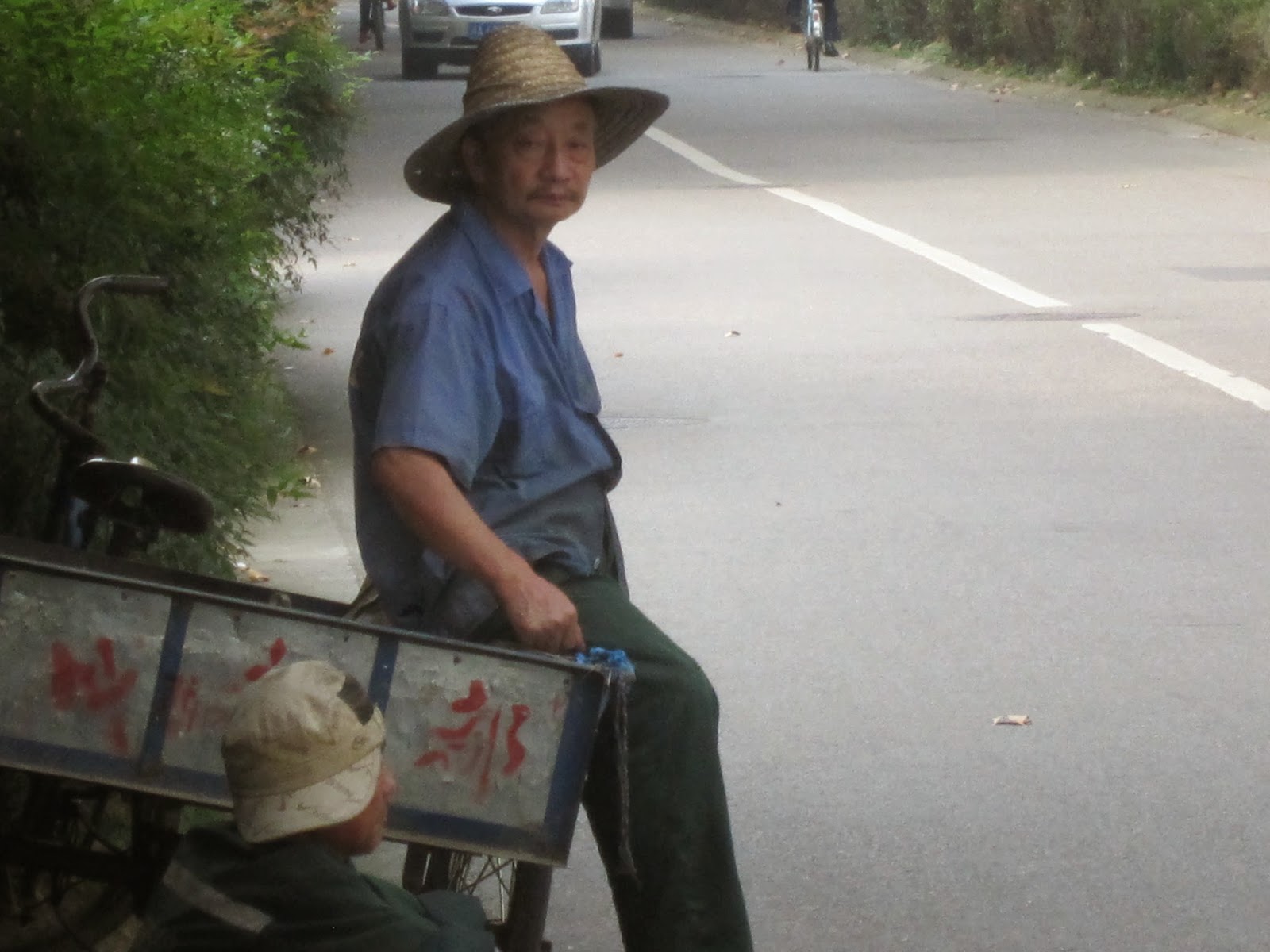 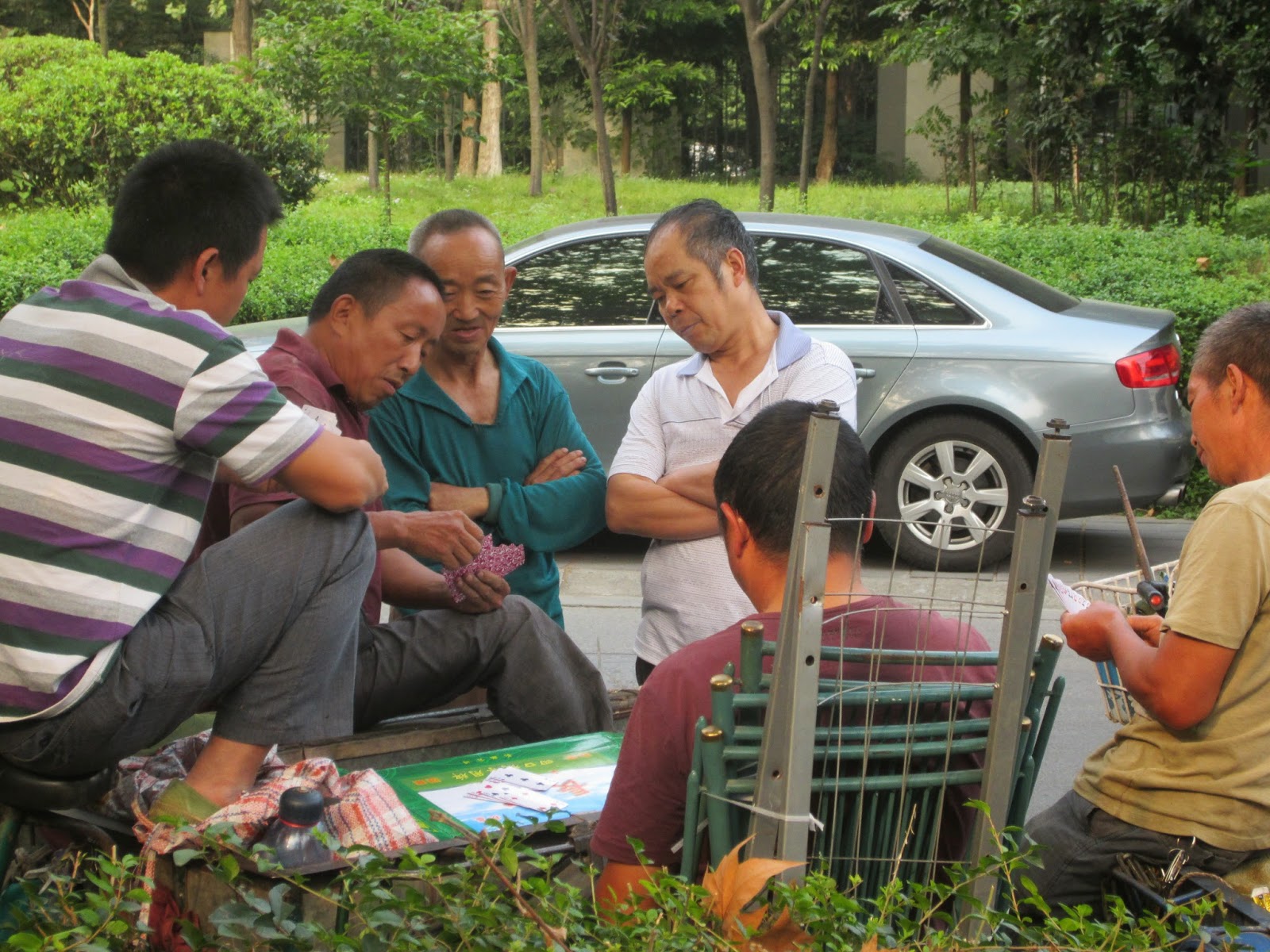 At about 4 P.M. the "card sharks" start appearing any and everywhere.  The games are lively and boisterous and draw spectators.  When I showed this picture to my students and asked them about the little piles of money that often appear, they started to laugh.  Gambling is illegal on the streets.  Our discussion resulted in part of one class period being devoted to teaching Hadd Lao Shi to play a traditional card game called "Staring", named so because of close card scrutiny required when playing.  I sucked at it, and they thought that was hilarious. 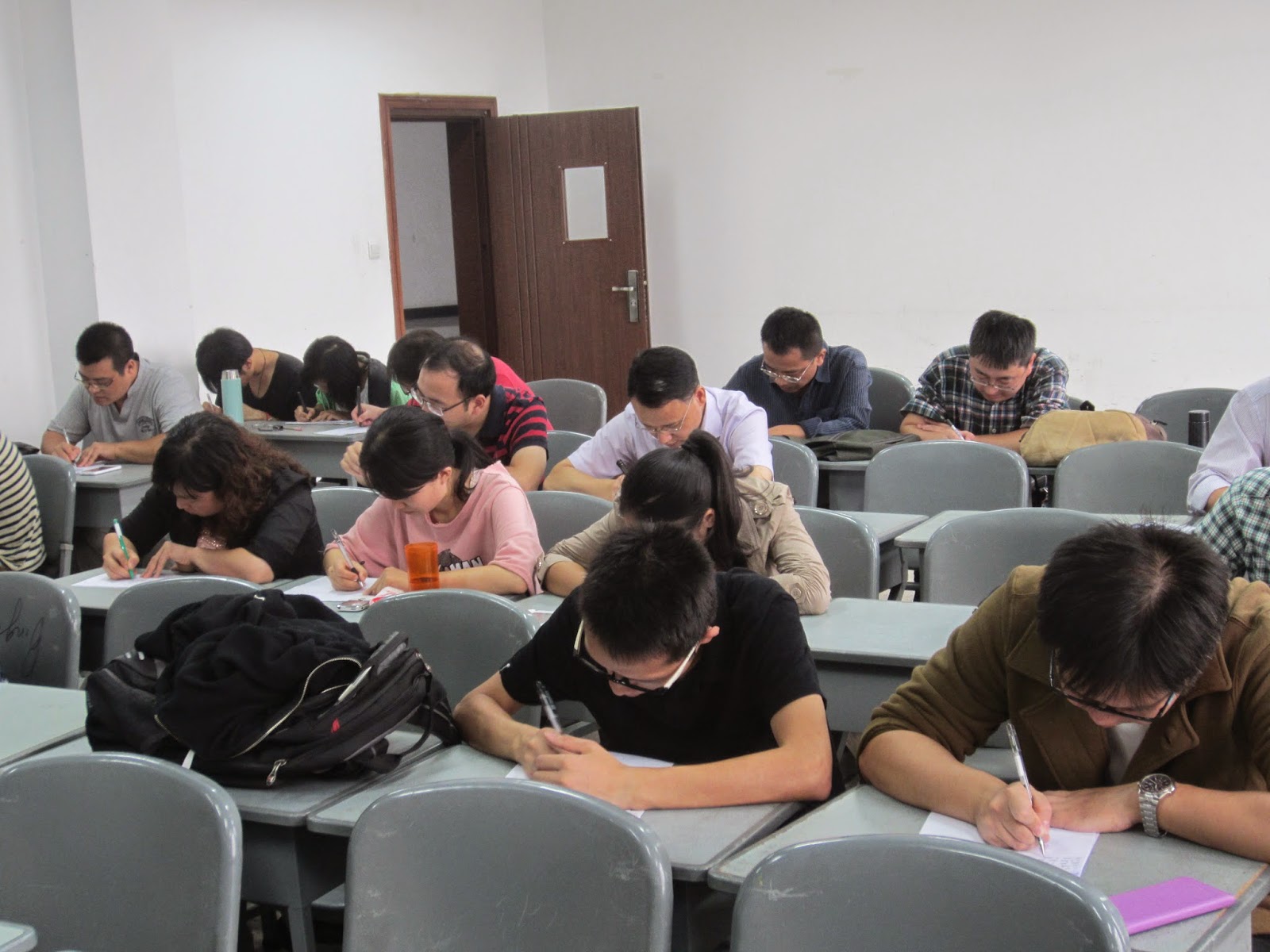 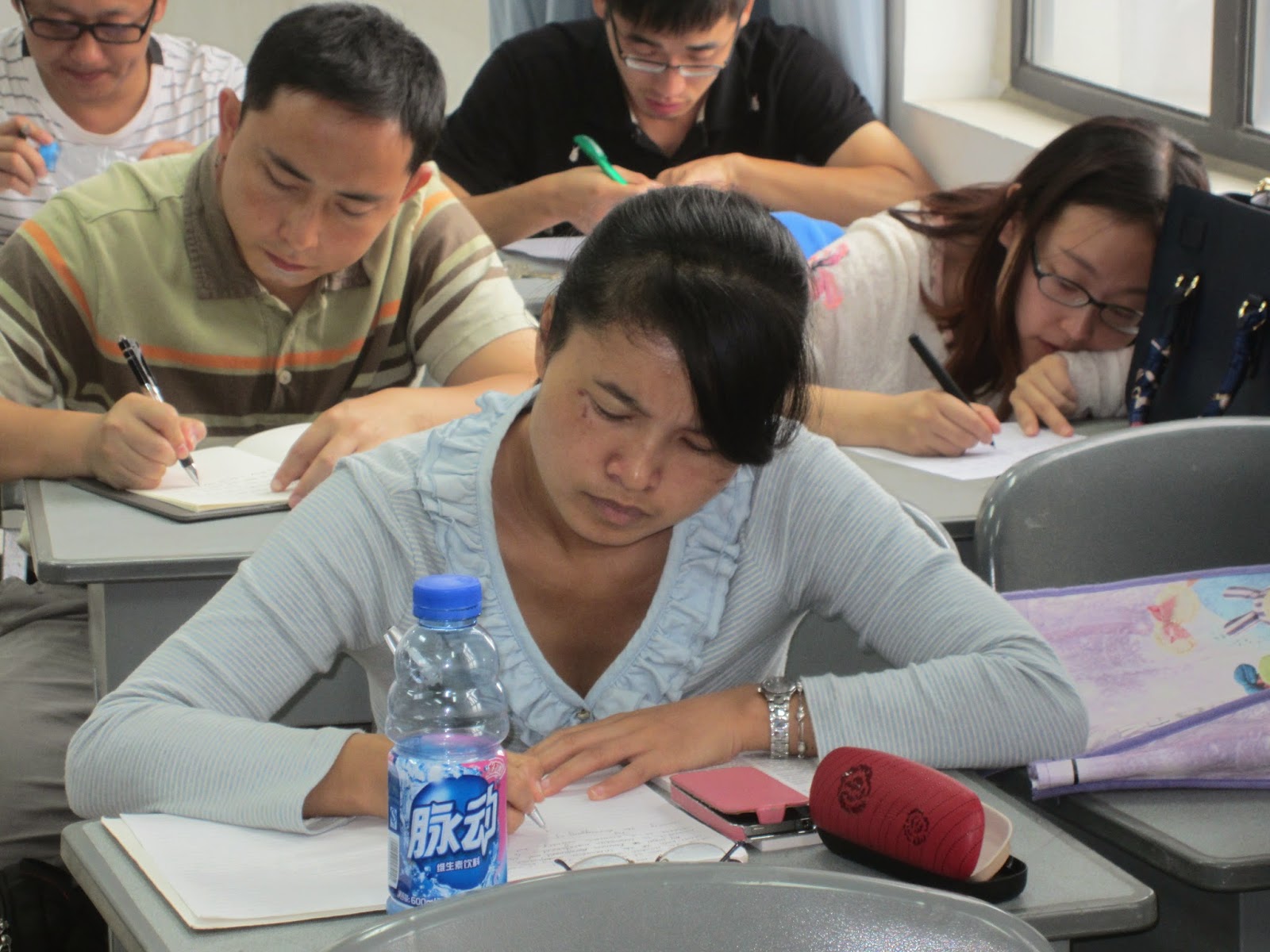 My class of PhD students.  Intense.  Focused.  So so curious about American issues--racism, freedom. wild animals running freely in our streets.  We had been discussing life mission/purposes with gusto; here they are writing about their personal missions.  Fabulous fabulous stuff.  When I look at these pictures, I think is it any wonder they lead the world pack academically?  Most of these students are older, have families and cars, and have worked at a job before returning for graduate degrees.  I am buying them all a place ticket to the U.S. and have agreed to sponsor them all for the rest of their lives.  That's how much I love them.  When I look them in the eye and talk one on one,  I can scarcely contain my emotions.  What manner of people ARE they????? 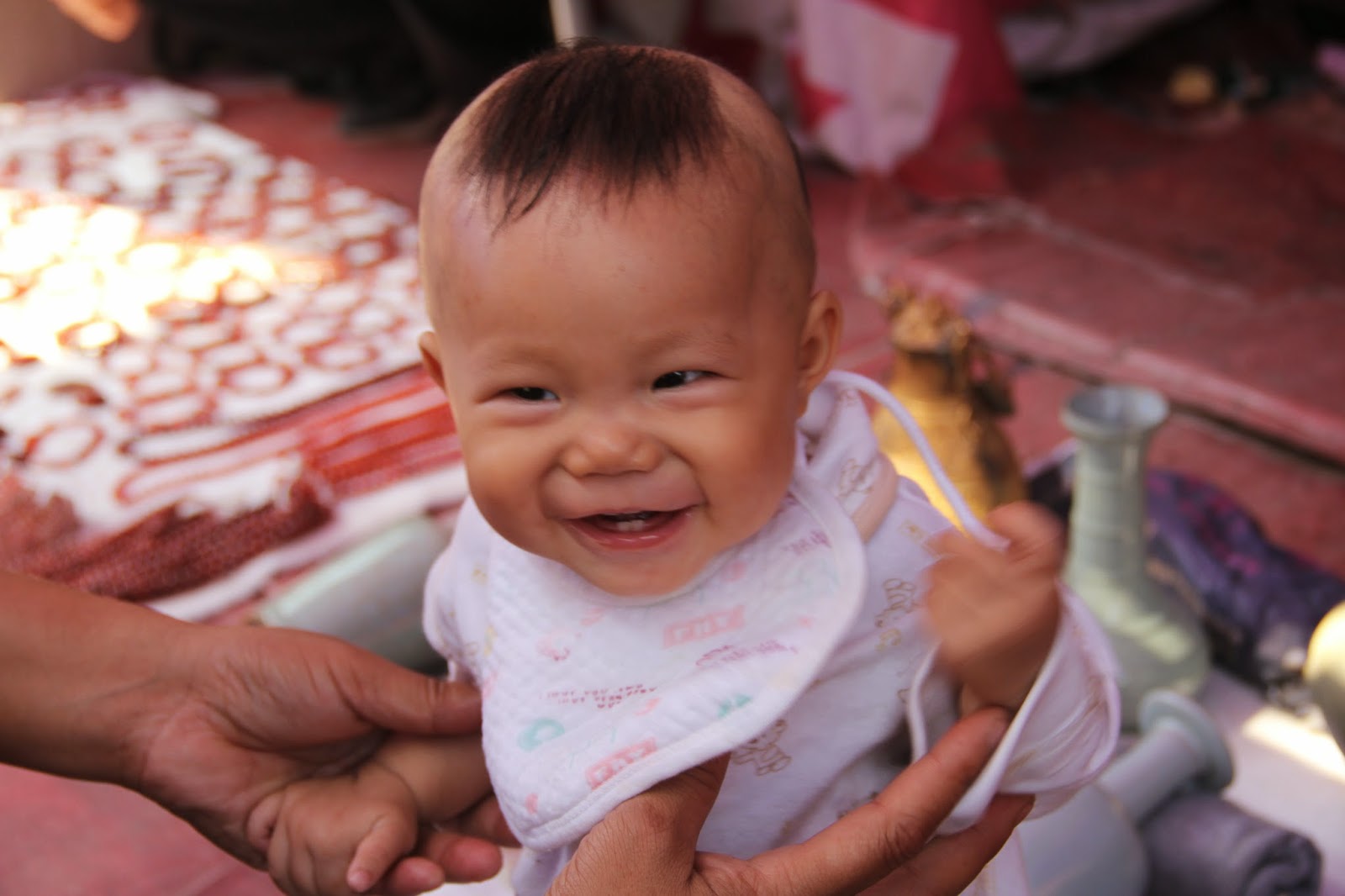 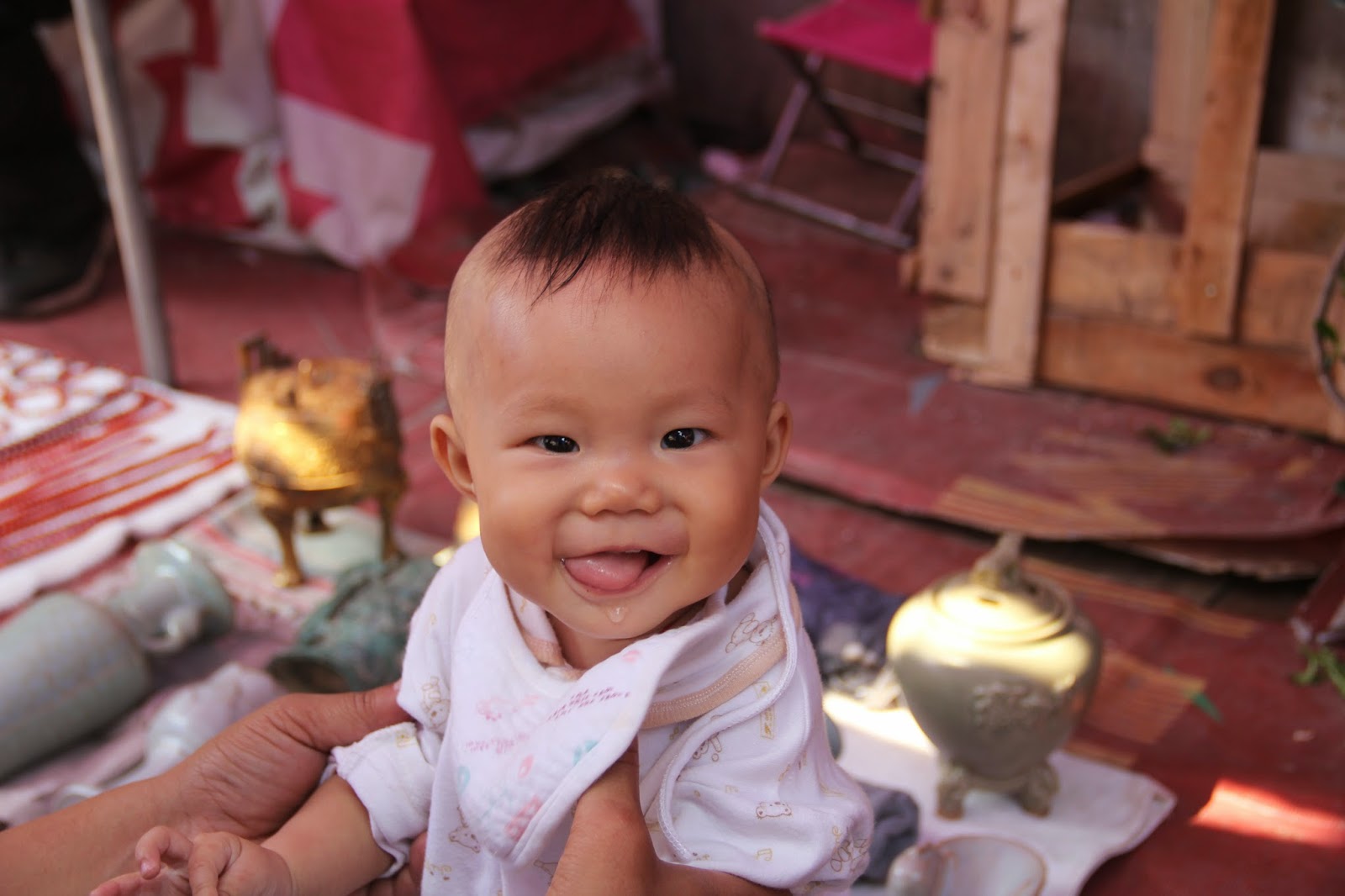 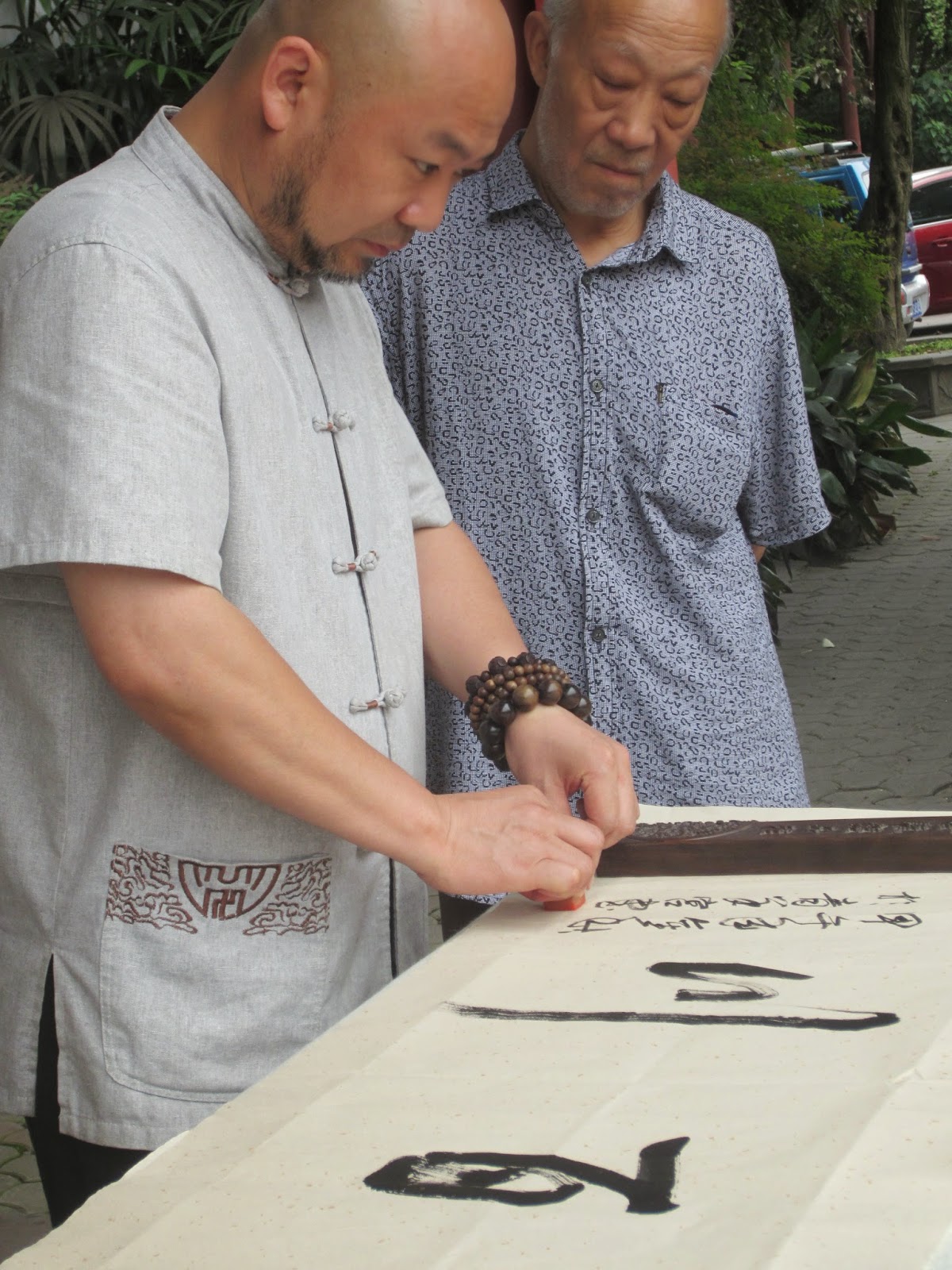 This calligrapher I found in a Buddhist monastery is about to roll up a finished piece.  He waved me off after I'd taken a few pictures.  Here he is applying his "signature" with his official chop. 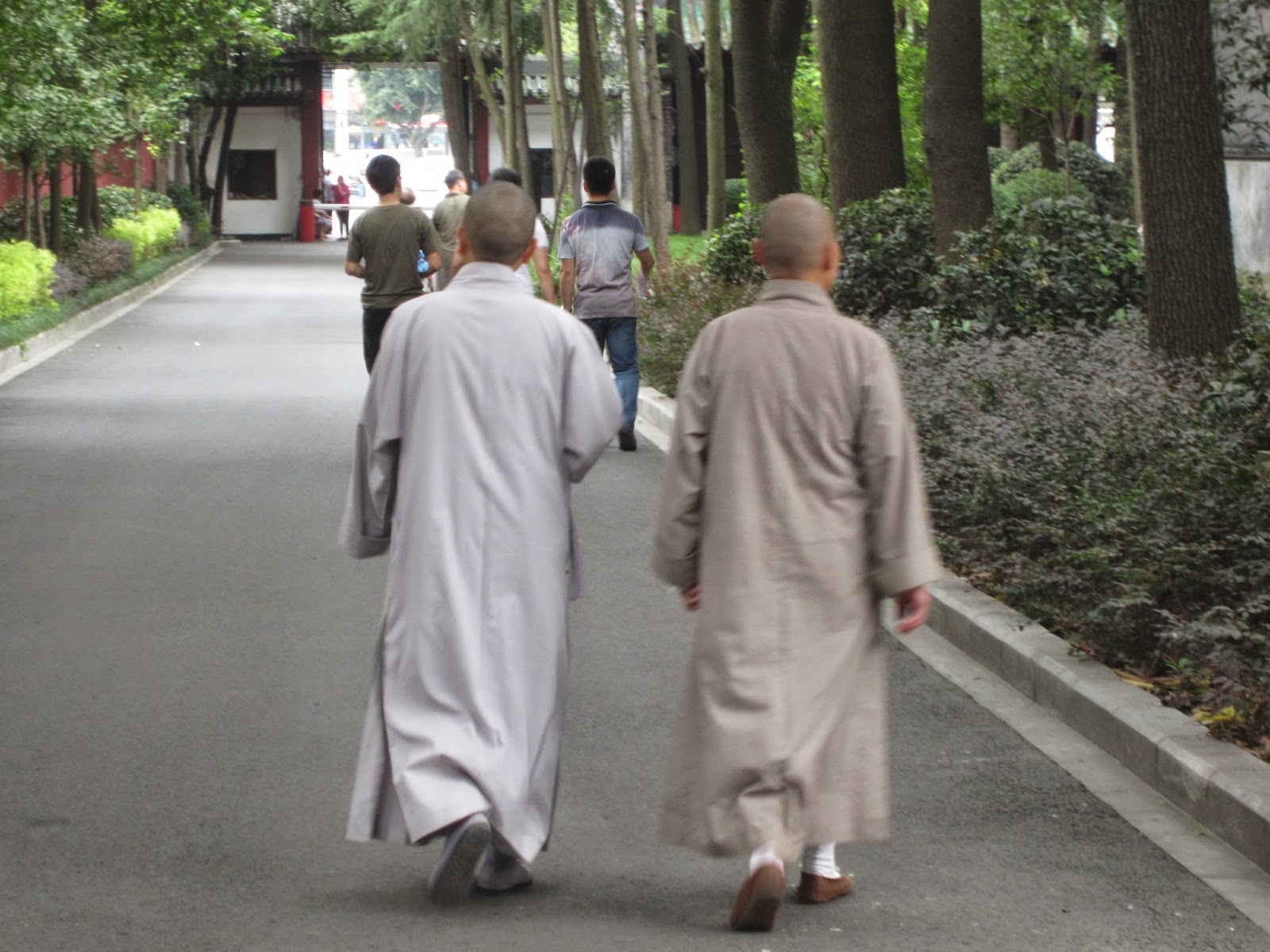 Toaist priests.  Holy men and women (I suspect that these are women) roam this city much like missionaries in Provo.  A sneak into their private quarters revealed laundry drying and opened books laid down on small bamboo tables. 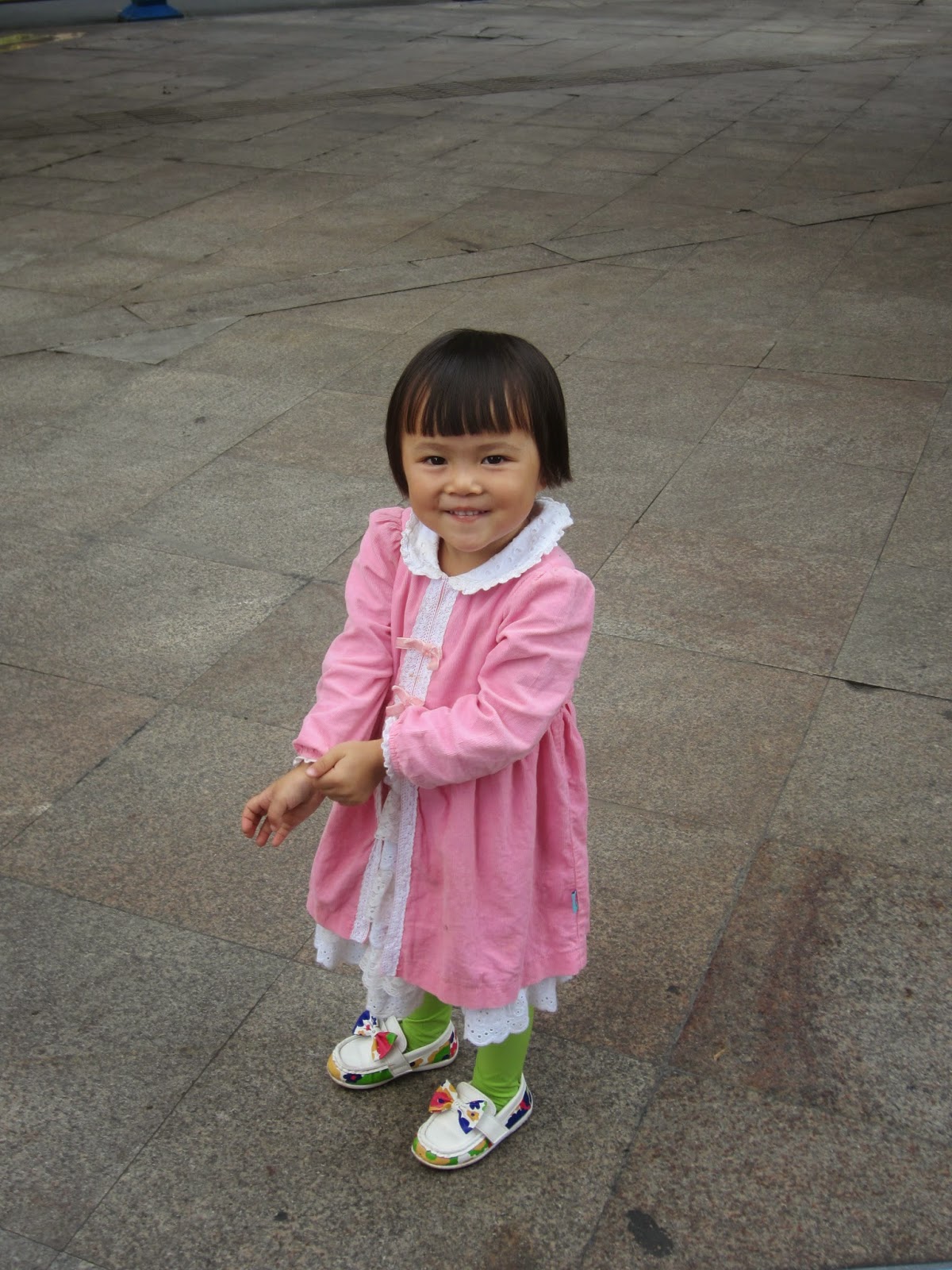 A snappy little dresser!  I wanted to distract her ("Here, little girl.  Want some candy?") and steal those shoes!  Diminuative Chinese girls wear the kind of haircut my mother imposed on me waaaaaaaaaay past the time I was willing.. 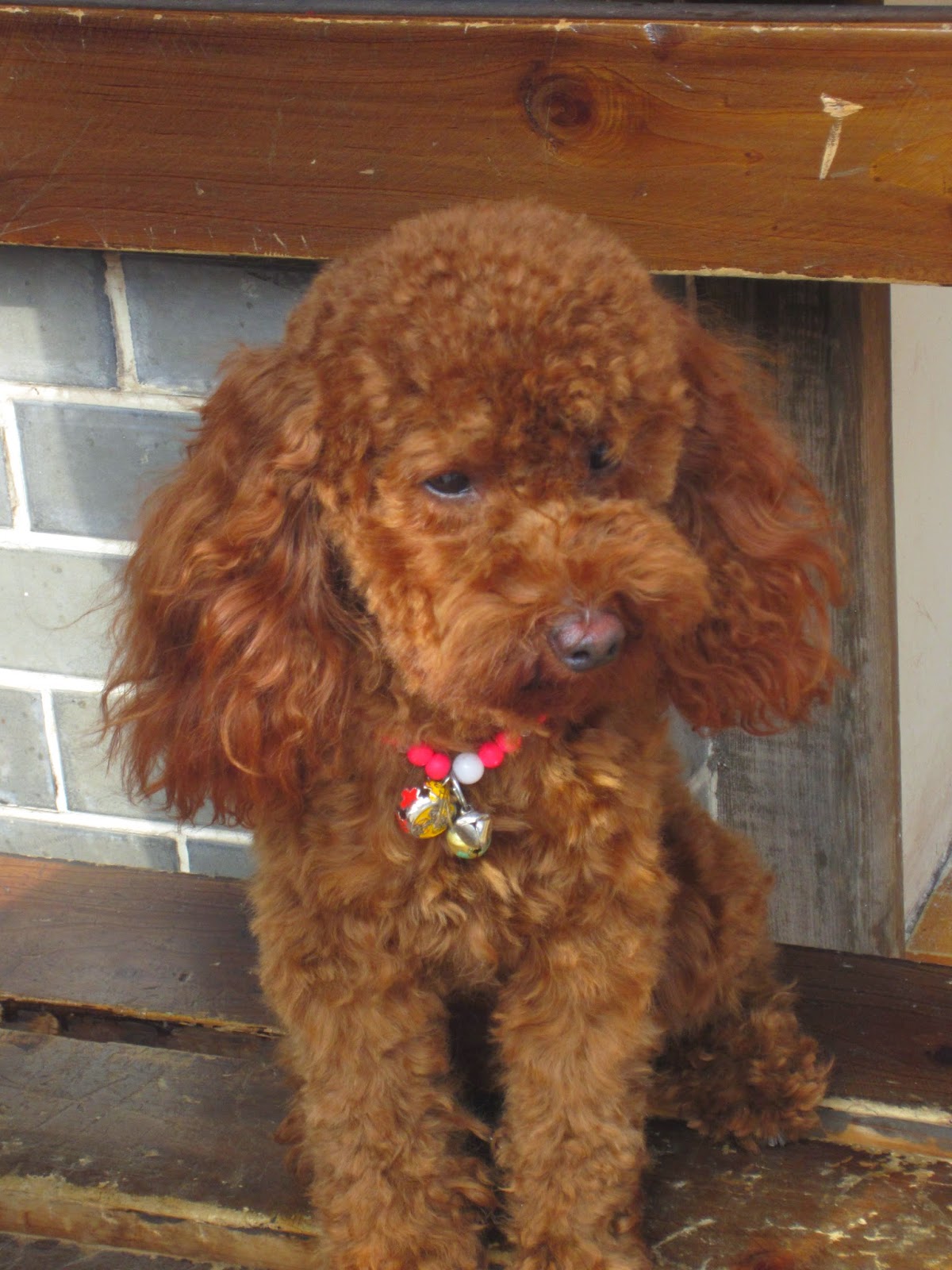 This little guy is a teddy.  I saw one who looked like he was driving a scooter, but I couldn't get my camera out fast enough!!  I had thought they were poodles!  He's about the weight of a loaf of bread and apparently very very smart.  Get thee a teddy!! 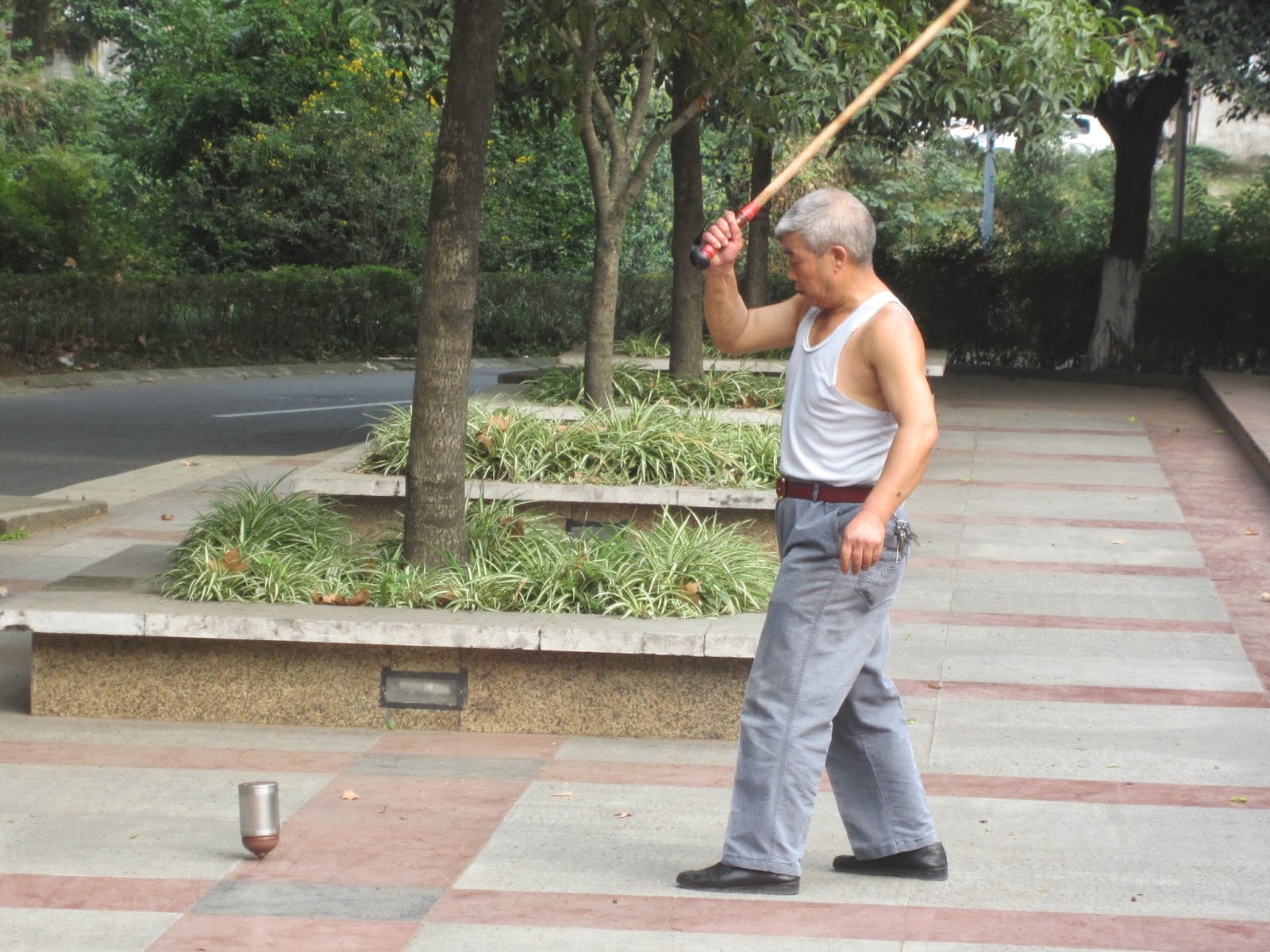 Mid afternoon retiree entertainment in a park across the river from us.  He snaps the whip to spin the top.  Crack!  Crack!  Behind him was some uninhibited geezer karaoke going on as well as elderly women doing what looked like line dancing--maybe zumba! 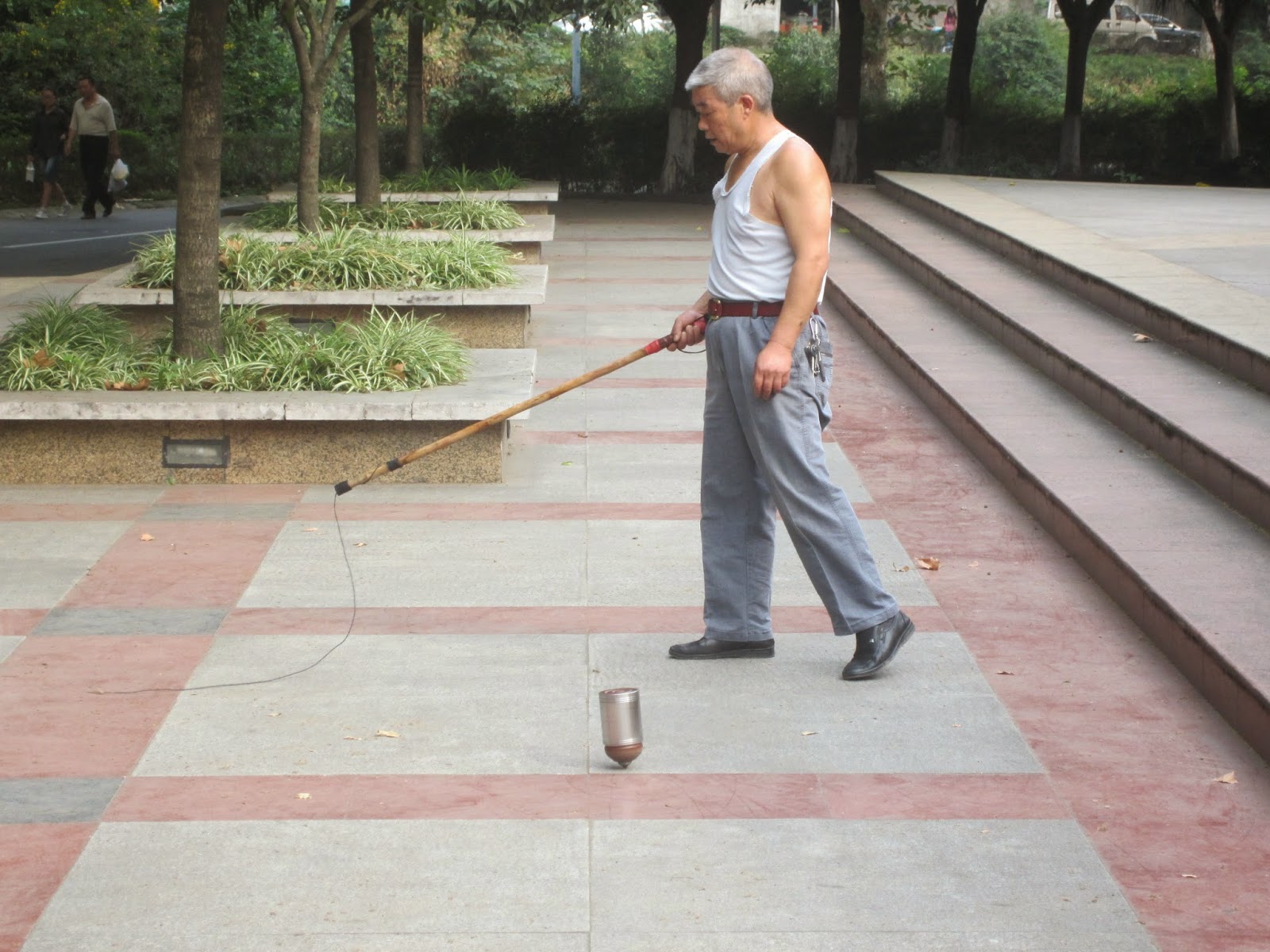 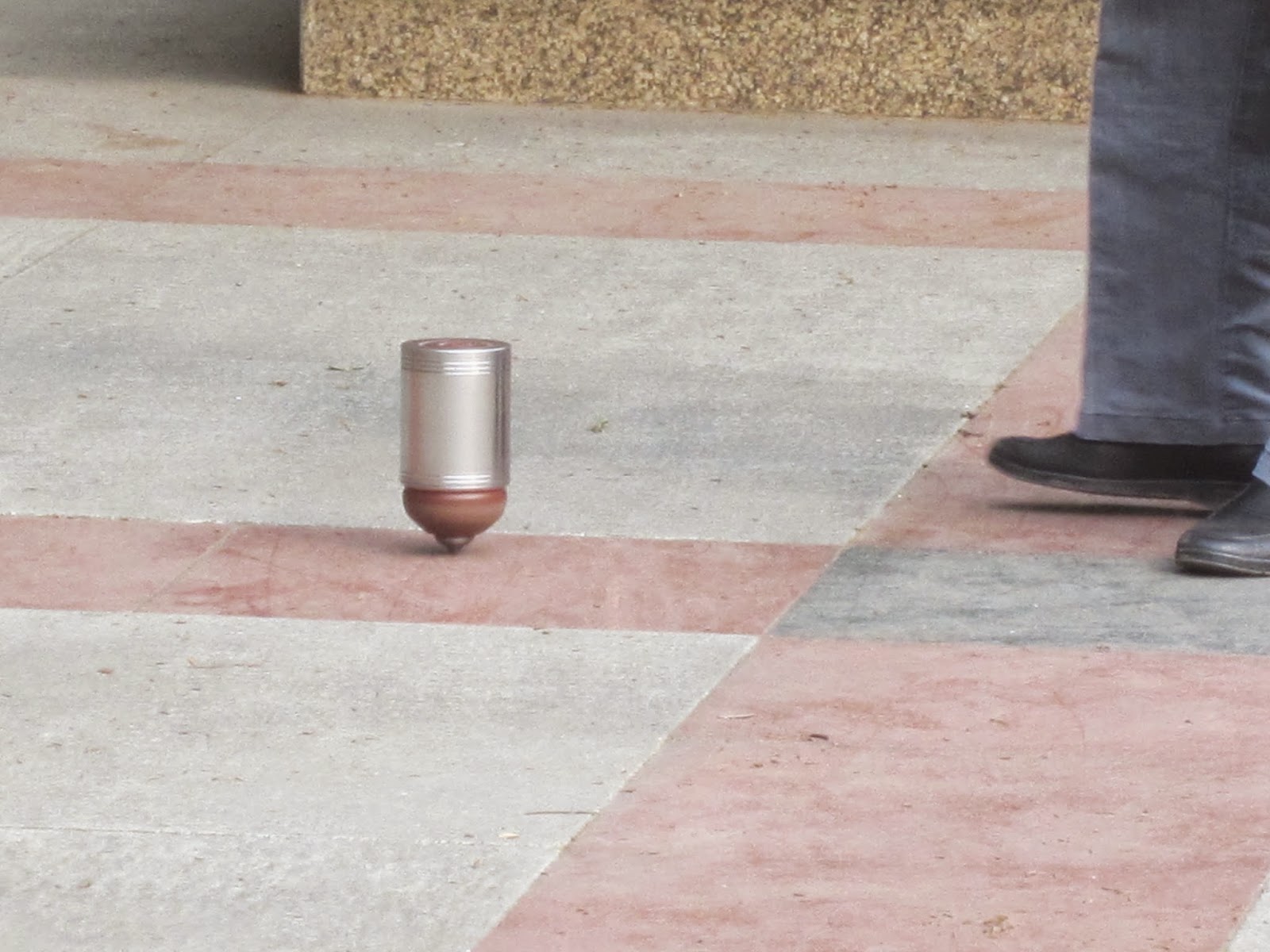 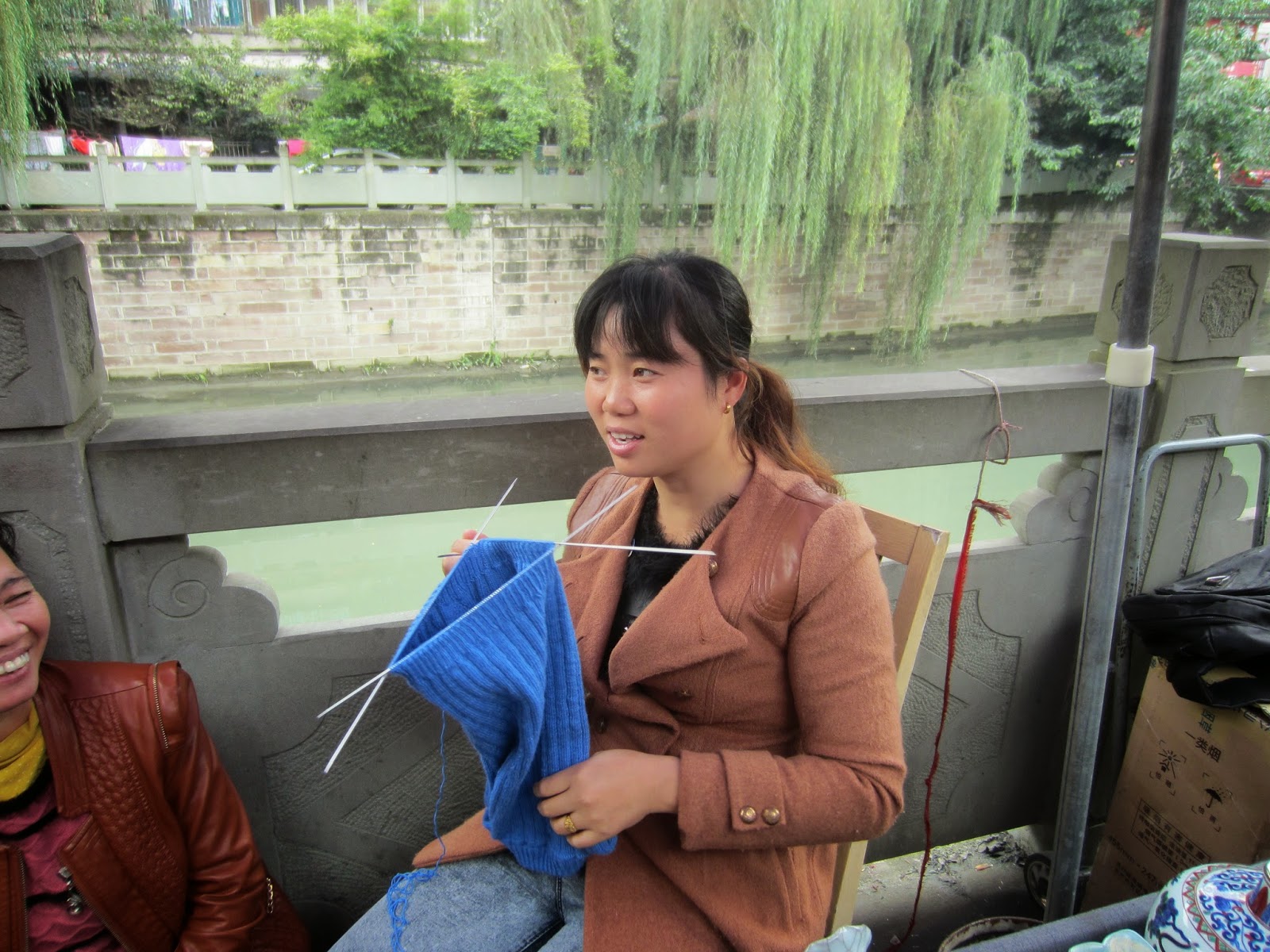 Do you think these needles do double duty for acupuncture too??  I could rock this girl's world with some circular knitting needles, no????? 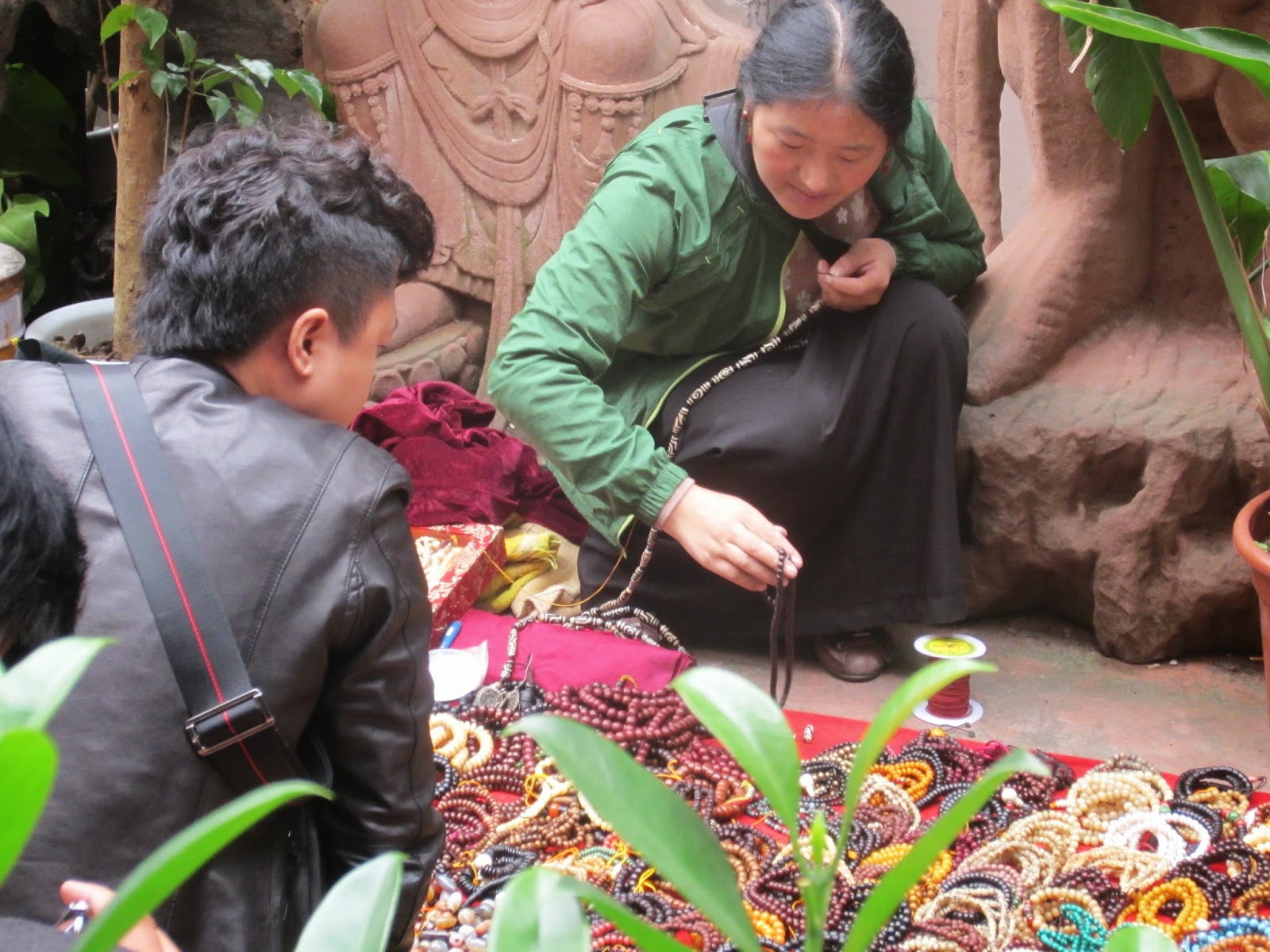 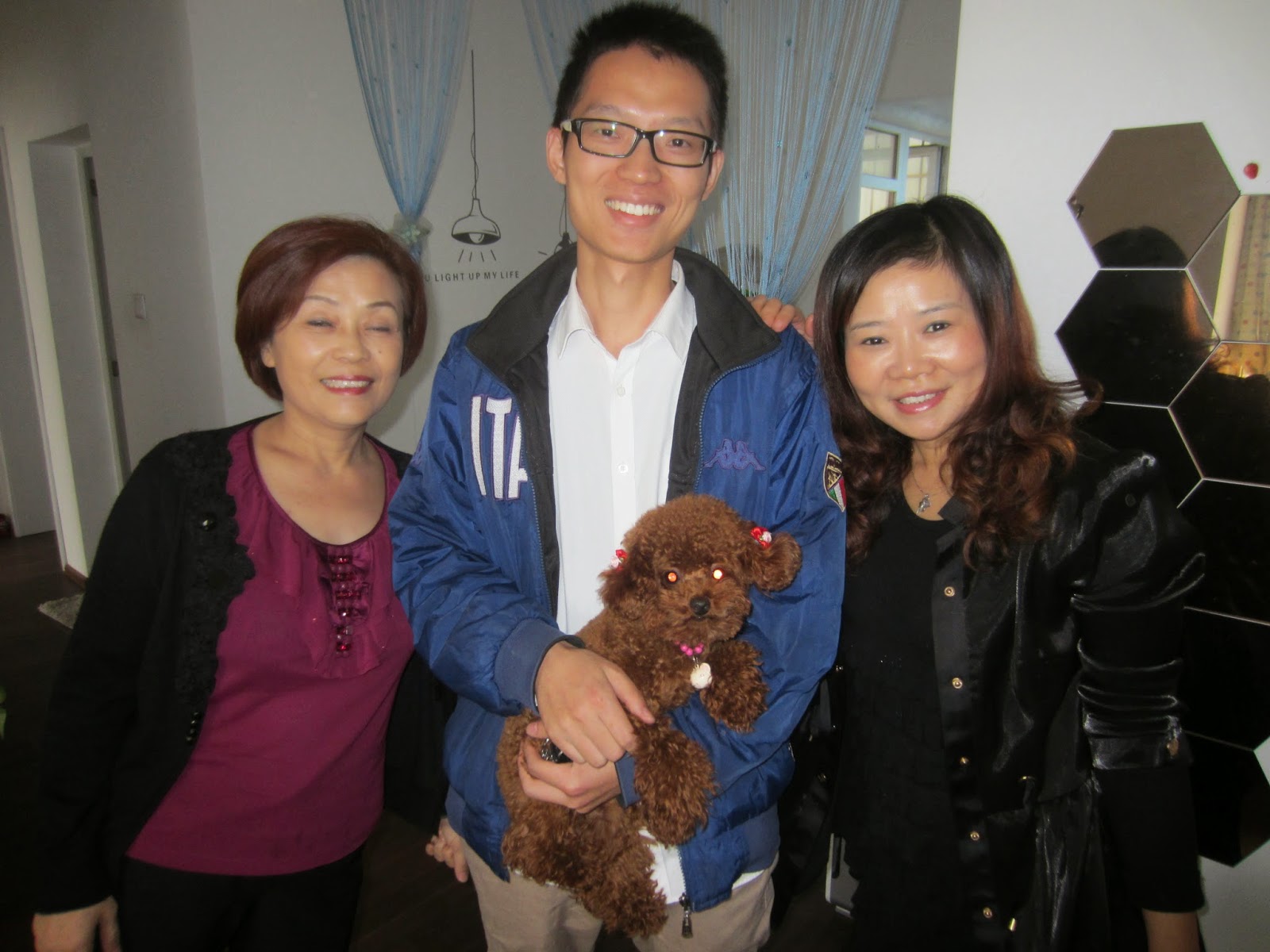 Student friend, Jason, with resident mother-in-law (although no wedding has taken place yet--apparently the bride and groom get a legal certificate from the government and gather with family and friends on an appointed day.  The groom gives a cup of tea to the bride's parents and voila!  They're married!  No one officiating.  Food.  Honeymoon.) on the right and her good friend on the left.  M.I.L. is a MAJOR hiker--goes every weekend and is about to take off for Thailand to hike!    Jason took a 2 week bike trip to Tibet last year.  Female teddy with bows.  How I ended up in their apartment is a cool story for another time.  Jason is headed in two years to study in Tennessee.  You may get to meet him!!
Posted by Mad Hadder at 10:58 PM

You are having enough experiences for a lifetime!

I love the snapshot (through snapshots) of everyday Chinese life and activities! Your love for your students says volumes about who they are.

You know I am your #1 fan, don't you? I LOVE your blog, Marilyn! I'm positive without any reservations that Mr. Munk is glowing over you writing talents (and jealous that this technical ability wasn't around in his day!) Truly, you are gifted, and YOUR PICTURES!! You have quite an eye for detail that I LOVE!! You made a "stuck at home" housewife long for the incredible world few get to see. Thank you so very much!