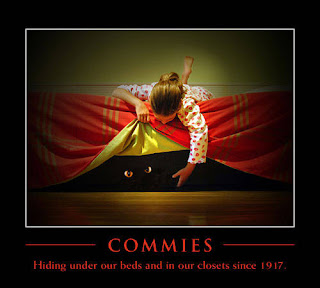 I'm not sure what kids "play" when they get together these days.  I suspect it involves a joystick.  Back in the day we played cowboys and Indians, house, farm animals, night games, board games when it was cold, Lewis and Clark (that story is like mother's milk to us Idahoans), and countless other concoctions which involved streets, empty lots, canal ditches, darkness, and oftentimes fire.  I am the youngest, so frequently I was pulled along and forced to adapt or at least take a minor part.  When I was five, my particular neighborhood at the time was fiercely engaged in a dramatic role play/adventure which involved very realistic exoduses (exodi?) through vacant lots and neighboring fields in a frantic attempt to outrun and evade...communists...Russians.  Our neighbors owned a set of abandoned motel units with which we had free rein. Oftentimes, we hid there under old dusty blankets, and I remember fervently praying we would not be caught.  I don't think my 5 year old mind knew the difference between reality and play at the time, unfortunately.  When the plot of our adventure called for travel, we took off through fields, oftentimes needing to stop along the way, build a fire, and roast hard little potatoes.  They were always undercooked--black on the outside.  Two years later I entered school.  The stakes were higher now.  Not only were those same Russians stalking me in my dreams and neighborhood play, they  also were, apparently, the reason we hopped under our desks when the terrifying siren sounded in drills..  Now, when we see those pictures, we all laugh and say, "Silly People of the 50's/Early 60's!!  Radiation isn't intimidated in the least by a wood desk blockade!"  Then, in third grade, enter, the Bay of Pigs.   I didn't know it was that until years later, and I saw pictures of Kennedy in his infamous rocking chair.  Rocking and fretting.  Why did the principal keep announcing over the intercom, "In the event..."?  The fervor of the these drills intensified as history unfolded.  Fortunately the nitty gritty traumatic global historical details of the news elude most children--in America, that is--sometimes.  I don't remember anything more than a few events associated.  But I DO remember one particular day.  We were having a bus evacuation drill, or so I thought.  All of the other times, we'd heard the alarm and headed for the bus.  Roll call and back to class.  On this particular day, however, the bus was instructed to take us all home.  Mid morning.  No drill!  Bombs were surely going to be raining on us before lunch.  When I realized this was not a drill and the REAL RUSSIANS WERE COMING, I did the unthinkable as the bus exited--I wet my pants.  I was truly truly panicked.  AND I left my coat at school.  My teacher brought it to me.  Those kinds of things stick in your head.  It was about 25 years later that I came face-to-face with bona fide  Russians--my first communists.  I was working at the time in the Texas State Senate in Austin.  A convoy of Russian diplomats had come to Texas--perhaps on a goodwill tour--but it looked all the world to me to be for the purpose of shopping!!!  Each of the dozen or so gentlemen were decked out in an expensive ten gallon Stetson, jeans,cowboy boots, and a fancy leather belt with a big old Texas longhorn belt buckle.  All of the senate staff were invited into the rotunda to behold them--Texas ettiquette requires such things, I suppose.  I'm ashamed to admit that I thought to myself, "Well, I'll be. They look just like everyone else."  I don't remember any punch or cookies;  I think we just gawked, maybe clapped a little, and went back to our offices.  Someone probably made a speech.  I'm sure it was diplomatic.  One must tread lightly around communists or bear the consequences.  Fifteen years later, I landed on communist soil.  The circumstances of that adventure are for another time, but let it suffice to say that when that plane landed in Beijing, for a few brief moments,  I was five again.  The communists were just outside that plane.  I should run.  I should grab raw potatoes and head off over the field so they wouldn't find me and do whatever communists do to little girls.  And for a brief moment before my rational mind returned, I almost ...wet my pants.

I wish I could say the lose of my bladder was as voluntary as yours. Something I failed to inherit.

Happy Earth Day to you too. I remember the exact point in time when you taught me the word, "biodegradable." I owe my appreciation for this earth, in large part, to you.

Wasn't that a time to live through? We never actually ran and hid from the commies, due to a lack of motels at our disposal, and potato fields, but I felt the fear. You really captured it. I loved the Russians in Texas. Awesome image!