This One's For You, Season! 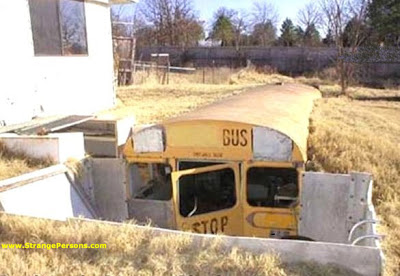 We had a robust discussion about 14 months ago when the family had gathered. I innocently asked if anyone had ever heard of using school buses to store food underground in the event of a disaster. I was met with blank stares, then a few giggles, then out and out knee-slapping guffaws. Assuring them I DIDN'T MAKE THIS STUFF UP, they nevertheless discounted it all as delusional on my part. The gauntlet was tossed, and I swore I WOULD track down the source of my information! You can imagine my delight last September on my rafting trip down the San Juan when the topic came up AGAIN! Is anyone really surprised that Bruce was my source?? I thought not. Here are the rest of the details as I jotted them down in my travel journal as we floated down the river: Someone in the valley here (I'm respecting their anonymity) has several buses packed and buried; enough accomodations exist bus-wise to take an entire ward (because heaven forbid civilization be forced to restart without nursery leaders, homemaking counselors, and choristers!) all the way to Evanston where they would join others who have made similar preparations (WHO KNEW??????); buses are covered with roofing made of inflated tires; an escape hatch allows air to enter; the buses are buried into a sloped hill, but the rear door is not buried but is covered with sand bags; one must tunnel into the bus from another entry; the buses are filled with a 3 month supply of food in case of a disease pandemic, but in the case of a nuclear blast only 15 days of food would be needed after which food in houses could be consumed when the survivalists exited the buses. And lest you find this hard to swallow, I submit the following video of a Canadian version. Feel free to watch the whole thing, but do NOT miss the FREAKING Underground BUS TRAIN!!!!!!

There. Now that I've redeemed my name in my immediate family, I have just one final word--C-L-A-U-S-T-R-O-P-H-O-B-I-A...
Wait. There's more. Down Salisbury way (There's a Salisbury in NC--perhaps this is it)
Survivalist’s stash found in buried bus
BY EMILY FORD
SALISBURY POST


Hidden from sight: Landscaping and a secret door conceal the entrance to a buried school bus that housed weapons that authorities said Ralph Eugene Christie Jr. was holding for an end-of-times scenario.

Authorities seized heavy artillery and military equipment Tuesday from a school bus that a man kept buried behind his mobile home, less than a half-mile from West Rowan Middle School.

Ralph Eugene Christie Jr., 40, 600 Barringer Road, is charged with eight felonies — six counts of possessing weapons of mass destruction, one count of manufacturing marijuana and one count of maintaining a dwelling to keep drugs.

He is in the Rowan County Detention Center under $15,000 bond.

Behind Christie’s mobile home, two large fish ponds conceal the entrance to the homemade bunker. The bus is entirely buried.

A tunnel leading to the bus is hidden by a large wooden door that lifts up from a raised, landscaped area surrounded by railroad ties.

The door is concealed behind azalea bushes and a sun dial. The only giveaways are metal hinges and a piece of chain link that serves as a handle.

A metal ladder is bolted to the side of the tunnel, which is about 5 feet in diameter and at least 10 feet deep.

The ladder leads down to cinder block steps and a small area scattered with debris, including a gas mask aerator, gun holster and empty shell casings.

In the school bus, a couch and chair create a sitting area surrounded by filing cabinets, food rations and debris. Railroad ties stand upright along the center, supporting the roof.

An old electric Army lantern apparently provided light, and a Citizens Band radio was hooked to a battery.

Damp and hot, the bus smelled of mold and mildew this morning. A three-ring binder held government-issue instructions for mortar shells. Booklets described how to make knives and mines.

Only recently, officers were able to obtain information to get probable cause to get a search warrant, he said. “We notified the (U.S. Alcohol, Tobacco and Firearms agency) and had an ATF agent with us.”

“He took a lot of prescription drugs that we also took possession of,” Wilhelm said. “He has been ill for several years and on lots of pain medication.”

Wilhelm said there was no evidence of ties to an organized militia.

“It appears that he’s a survivalist,” he said. “We didn’t uncover any great plan to destroy Rowan County.”

It appeared Christie was preparing for the end of the world, Wilhelm said.

“If end-time comes, he was ready for it,” he said.

“But the danger in that is a person who has hand grenades and det-cord and all those things may not have criminal intent to wreak havoc, but if someone else were to find his bunker, they may have.”

“But that possibility is always there,” he said. “And even if that person claims he had those items for self-protection, another person can get ahold of that.”

But at the bunker this morning, a neighbor said Christie is dangerous to himself and others.

“They need to keep him in jail,” the neighbor said. “If they don’t, he’ll hurt somebody. ... He’s obsessed with weapons.”

Two people have died on Christie’s property in the past year.

Sherry Rumple, Christie’s girlfriend, died of a drug overdose a few months ago, said Sgt. Terry Agner said. She was in her 40s, he said.

Another man died there about a year ago from a heart attack, Agner said. His name was not immediately available.

Wilhelm said Christie may have bought the materials at legitimate military supply shows. The gear likely was disarmed when he bought it, and then he armed it, Wilhelm said.

Christie is not connected to other cases where law enforcement has confiscated illegal military weapons.

“People just need to be aware that survivalists are around,” Wilhelm said.

This morning, a German shepherd puppy sat on the steps to Christie’s mobile home and barked a greeting. The fountain bubbled in the fish pond.

Nearby stood an old Army jeep with a disarmed machine gun mounted on top.

An old car was parked across the driveway, blocking it. Two other buses were on the property.

One was filled with debris. The other, a newer bus, was parked behind the home.

YES! This is precisely the post I've been waiting for. I can't wait to post an update on my blog. And forget apartment hunting....how do we get an invite to this guy's underground bus train? THAT would be high living. Plus, he's totally the type of neighbor I'd like to have.

Don't be surprised if Paco and I show up in full regalia at the next school district bus auction.

I'm wondering if there is another spectrum of respectable "survivalists" that aren't so interested in packing the weapons but just filling their buses with food/water/clothing that such? We could fit in that category, right? I'm starting to think I want my own bus now.