...To See What He Could See 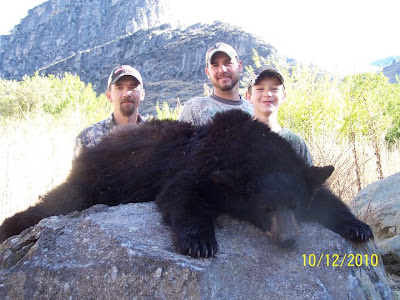 What did YOU do this weekend? I never know what answers I'll get in "Seventh Heaven." Hunting season adds a new twist to the game as well. I also got a story about one mom giving a distressed baby kitten CPR! All manner of good writing material here. Gimme a pen! Isn't this bear a beut? I think he's headed for Rugland. I was hoping for a wee taste of bear meat to satisfy my curiosity, but apparently this bear went bad before they could get him to civilization. Jayden picked him out of a tree on the Oregon/Idaho border. Kerplunk. But the grissliest part of the story was the imitation of the sound the bear made. Kind of a high-pitched screech. Jayden says it still haunts him. Me too.
Meanwhile I'm having to up the ante in school. How am I to compete with the "Call of the Wild"? I look down on a sea of glassy-eyed stares, and I KNOW their minds are in the hills! We have a tradition here at our school--The Biggest Buck Contest. Bring in your antlers, measure them, and see if you snagged the winner!! A few years ago, one Gregory misinterpreted the contest rules and brought in a whole head--hair, tongue-lolling out, eyes--you get the picture. Clan of the Cave Bear for about two months here until we get it all out of our system and return to the 21st Century...sort of.
Posted by Mad Hadder at 6:05 AM

You really need to keep us more updated with seventh grade details on your class blog. I really think there is more to all this Bear Lake culture to be shared. It is so....out there.