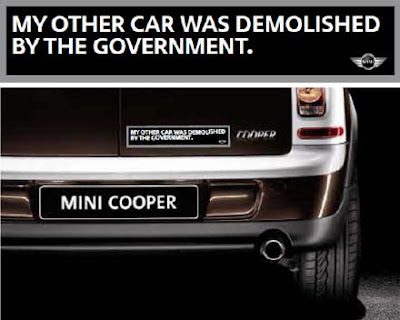 Have you ever actually called those numbers on the backs of semi's? We were booking it across Iowa a few weeks ago. A large multi-wheeled vehicle in front of us--No wait!--he was at our side! No, never mind-- there he is in front! No, cancel that! He's to the right! Whoa! The left! No small feat when you're as large as some countries! I immediately dropped my knitting, took out my cell phone, and dialed the number on his rump. My message was brief and to the point. I gave the recording our location, the time of day, the truck's ID number, and a curt little message about the state of our nerves. As we passed this guy later, I couldn't help but turn my head back to see what kind of a SOCK MONKEY this company had working for it. For all I know that recording is the trucking equivalent of the dead letter office, but still...it felt good to vent.
Wouldn't you love to be able to call numbers like that when you see parents stuffing Twinkies in the grocery cart while their kid shuffles alongside about 30 pounds overweight or when cavemen are blasting their radios like they are the sole inhabitants of earth or when somebody's cell phone goes off in a movie or when a telemarketer calls at 10 P.M.? When else?????
Posted by Mad Hadder at 4:50 PM

When sales associates are very unhelpful. I've had several very maddening experiences at our local Michael's lately. Makes me never want to go there again....give up my crafting needs forever!

But you KNEW that was the East coast way...

Every time I pump gas, I want to call someone, and SWEAR like a drunken sailor.