First of all, raise your right hand and tell me you'll promise to get this whole documentary somewhere--amazon prime, hulu, Netflix--just get it.  It is indescribable.  You have never met anyone like Bill Cunningham.

Had I not stayed in my pajamas until well after 6 P.M. (I only threw on something else--actually just a top because the alpacas were loping down the road and I had to assist), I would never have been lounging in front of the computer.  Had I not finished all of Grey's Anatomy humanly possible to watch without paying money, I would never have been scrolling for something else to see.  Had I not declared today a holiday after I studied for an exam for nearly 6 hours, I would have been cleaning out a cellar or toting this or that here or there.  The planets aligned.  I randomly found Bill.

Bill Cunningham dropped out of Harvard and ended up making ladies' hats in NYC.  From there he was drafted. Then he picked up a camera and has been documenting fashion for nearly 60 years since.  He lived in an apartment in Carnegie Hall sans kitchen, bathroom, and closets--it was wall to wall filing cabinets of negatives with a make-shift bed laid out over what look to be a couple of cans.  Then Carnegie decided to oust all their artsy-fartsie 40 year residents for some reason. Just recently Carnegie Hall relocated him to the 9th floor of a ritzy apartment building overlooking Central Park.  Bill had them remove all the kitchen cabinets and appliances in his new digs to create space for his filing cabinets.  He dines on the cheapest sandwiches and refuses food at the hundreds and hundreds of fashion events he attends. Food means absolutely nothing to him.  Nor does his own fashion. He wears simple khakis, a neutral sweater, and a blue pocketed smock thing everywhere he goes (including affairs in HIS honor!) because his camera tears his clothing.  He goes to mass weekly (he teared up and put his head down when the interviewer asked him about his religious life) and has never had a romantic interest.  Claims he never had time for it and just didn't think about it. He rides a bike everywhere he goes and commented he was on #29--the previous 28 having been stolen.

Lest you've brushed him off as an eccentric, let me hasten to add that Bill is a regular columnist for the New York Times and has received prestigious awards for his photographic excellence from the masters all over the world--most notably Paris.  He is a true egalitarian--his friends include the likes of Brooke Astor as well as Who's Who in the fashion industry and on down.  If he passed you pedaling around in Manhattan, you might think, "Sheesh.  Be careful, old guy."

Watch this.  Let me know if you fell in love with him like I did.  He's a treasure indeed. Who knew I could have a thing for an octagenarian? 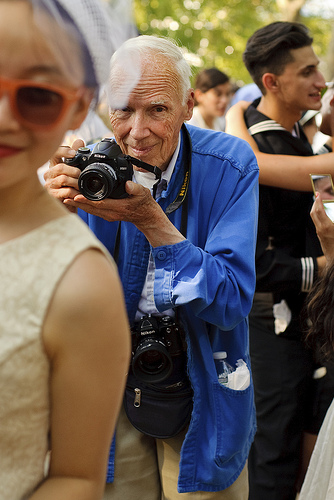 Fabulous! It's in my queue!