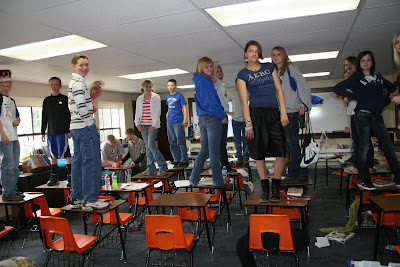 I've shown Dead Poet's Society to an estimated 600 students over the years--probably viewed the movie well over 2 dozen times. It NEVER fails to touch me on a very deep level. This particular class had the most amazing discussion at the conclusion today and then couldn't resist hopping up on desktops. I don't flatter myself that they were paying me the homage Mr. Keating's students were paying him. They just wanted the novelty of doing something "forbidden". Carpe Diem! In other news, we bring you haircuts! 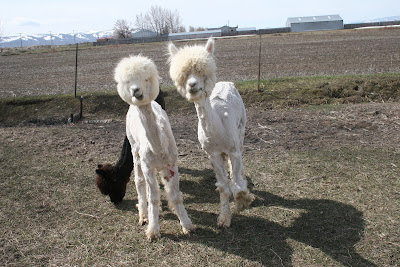 And Visitors! My annual Tour de Biblioteque (home library). We usually do that in the autumn when temperatures are balmy and perfect. This year's tour featured much shivering. 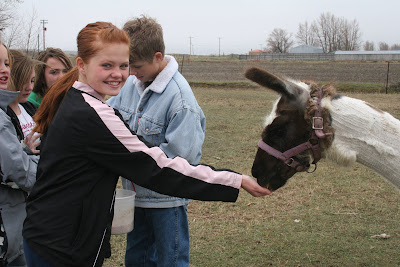 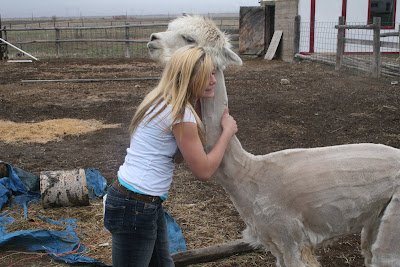 And on a more somber note--Into each life some bully must fall...Here's Obama caught in the act of terrorizing Emerson. Obama spends a good portion of his day chasing, nipping, and menacingly confining the alpacas to a corner of the corral. As a result he is covered in much warranted green spit polka dots, but a bully is what he remains. 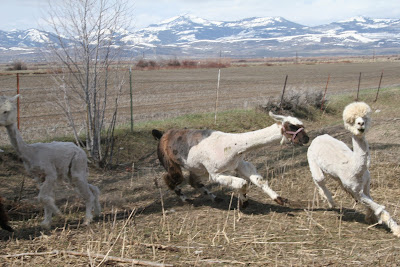 Whoa! Those are some nice new 'do's for the llamas.

How aptly named is your bully!

What did you expect when you gave him that name?! He's bound to cause some problems. Did I just say that? Hope I don't get stoned by some of your readers. Can you separate him from the others so they aren't terrorized?
My laminator just came. Thank you so much! I can't wait to use it :)

Dead Poet's Society is one of my very favorite movies.

Nice pictures!! What a bunch of folly going on there!

The llamas scored the comments so far, but I was really touched when the picture came up with all the kids standing on their desks. I knew just what it was from and totally credit their action as a salute to you.

Nice compliment, Patti, but I'm afraid I can't take it honestly. I KNOW these kids! Elyse, your political petticoat is showing! Season, I'm thinking I may have to take the scissors to Aristotle--his vision is impaired! Shelly, folly? I guess you could call it that. We get frisky in the spring--the result of a long long long long long winter.