I kifed this from a blog I read. I'm sure she won't mind--might be flattered. YOU HAVEN'T READ THE UNDERNEATH?????? I'll just pretend you didn't say that.


Out Loud, If You Please: Guest Post by Kathi Appelt

Many of you are probably familiar with Kathi Appelt - her 2008 book, The Underneath, was a Newbery Honor book and a National Book Award Finalist, not to mention garnering rave reviews from all number of review sources (at library conferences, many of the publishers put large star bookmarks in their books for each starred review or honor that book received. When I saw The Underneath at TLA last year, the book could hardly stay closed, it was so full of star bookmarks).

Her newest book, Keeper, has the same lyrical quality as The Underneath and both books seem to me to be ones that are best served by being read aloud. If the words are magical on the page, they're even more so when they're being spoken.

I wrote yesterday about how much I love reading aloud. And it turns out that Kathi shares that same love. Which, after reading her books, doesn't come as much of a surprise to me. 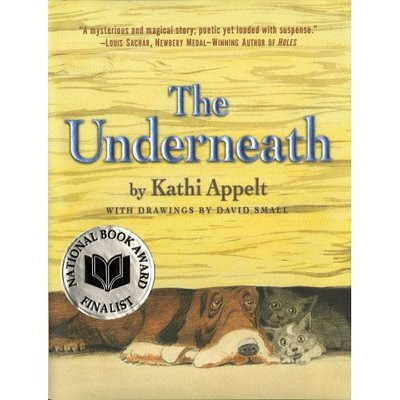 I wish that I could say that I had always wanted to write books for kids, but the cold, hard truth is that I never would have thought about it were it not for the arrival of my first son Jacob.

And once he came, was I ever unprepared!!! Being a mom caught me by complete surprise. What was I supposed to do with him? Here I was, an educated woman, but who nevertheless knew very little about raising kids.

I confess that I was never the type to do kid-type activities. Making figures out of Play-Doh? Not me. I squeezed the stuff for therapy.

Hide-and-seek? I hated that game.

All I had left in my bag of tricks so far as entertaining and engaging my little guy was reading. After all, one of the good things about my father was that he read to me when I was very small. I could do that too. At first, since Jacob was born while I was in graduate school, I just read whatever I had to read for school, which at the time meant the Greeks. (I was taking a course in Classical Rhetoric—exciting stuff, I know). And that seemed to be enough until he got to be about five or six months old, and then, well, Aristotle lost his allure.

A quick hop to the bookstore, and our world changed forever. This was back in 1982 and technological changes were sweeping the children’s book industry, allowing for art to be reproduced in ways that it hadn’t before. The array of beautiful books, featuring illustrators like Ruth Heller, Susan Jeffers, David McPhail and the Pinkneys were just landing on shelves, their art simply breathtaking.

What I discovered was that if either one of us was tired or fussy, we could pick up a book, sit down together, and reconnect with ourselves and each other in a way that felt completely magical.

When Jacob’s younger brother Cooper arrived two years later, Jake and I were old hands at creating our own “campfire.” Cooper simply joined in. Often, at the end of the day, their father joined us. With the four of us surrounding a book or two or ten, we closed our circle. In fact, I called it “the magic circle” for the sense of safety and enchantment that it offered to our family.

Reading out loud became part of the fabric of our family, and I read on road trips, in airports, at the doctor’s office, wherever. And I also read to the boys until they were well into their teens. It was just what we did together. We graduated from Ruth Heller to Brian Jacques and Gary Paulsen and Lloyd Alexander and Ursula K. LeGuin. We even ventured into J.R.R. Tolkein, followed by T.A. Barron and Philip Pullman. Story was our family glue.

Having experienced this magic, my huge longing is for every child to be read to every day. I have a deep-seated belief that if that were to happen, that if every child were read to every day, by a caring adult, the world as we know would make a shift. It doesn’t even really matter what the books are. The simple act of pulling a child up next to you and reading together sends a significant message of caring.

One of my students at Vermont College of Fine Arts, Tamara Ellis Smith, in her critical thesis, called this act, “The Vibrant Triangle,” in which the three points of the triangle consisted of the child, the adult, and the book, and what makes it vibrant is the reading aloud.

For me, writing a book that calls for oral reading hearkens to my yearning for that vibrant triangle to occur over and over again. And so with all my books, from picture books to my novels for middle graders, I take great care with the three R’s—repetition, resonance, and rhythm—in my prose, reading it out loud to myself over and over again, to make sure that it has that capacity for oral reading, for vibrancy.

It’s important. It matters. There is more at hand than just the story. There’s magic.
Posted by Mad Hadder at 5:40 AM