Poof! You're a President! 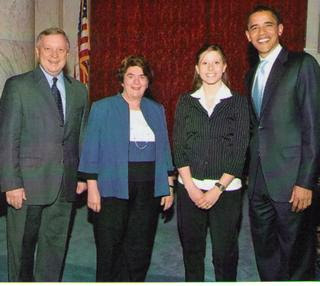 Here is someone some of you know (other than the guy to the right). Hannah (just left of him) met Obama in his capacity as her senator during a trip she took to DC a year or so ago. I believe she was there on something official--I really should get my stories straight. I'll do that and get back to you. Rather than pontificate about anything political tonight, however, I am choosing to focus on something far less global--being in photographs. Now Hannah here looks great! She has a spiffy suit, is well coiffed, and looks confident. Her regal moment is etched in time through the photograph. Obama, as well, appears on top of his game. He always looks like the groom on a wedding cake, doesn't he? Their planets were aligned to produce one great photo! I think it should be made into posters for everyone Hannah knows AND hung prominently. If I were in this photo, I would most likely have skewed my mouth--or worse still said something to the photographer just as his shutter snapped--resulting in a monstrosity good only for deleting. I probably would have shut my eyes or later discovered toilet paper stuck to my shoe. I'm not sure whether there was a line of people waiting to step into the photo beside the senator after Hannah was escorted away. I'm imagining here. Hopefully she got lunch with Senator Obama and was then given a paperweight or at least a pen or something. My point (and I do have one) is that generally speaking my photo karma is lousy. My eyes are uneven, I'm usually caught saying something out of the side of my mouth to somebody next to me, and my mouth appears not only unnatural but deformed. Why is that? I don't see a freak when I look in the mirror! Usually not, anyway. In conclusion, Hannah, be ever so happy that none of my photograph demons are yours! Now you can rejoice that not only did your diligent campaigning pay off in huge White House dividends come January, but you ALSO had the good fortune to have been in the right place at the right time with your eyes open and your suit pressed to pull off one great photo. I sincerely congratulate you on all counts. Having said that, I shall excuse myself to photoshop out the inch of white slip showing below my skirt in recent wedding photos... (note: Should you not recognize Hannah--she's a family friend and former student from way back--daughter of my principal and good friends Bruce and Cheryl, gifted writer, brilliant student, and recently graduated physician's assistant now working in the down and dirty part of Chicago while her husband continues in medical school. She's articulate and beautiful. And happy happy happy since last Tuesday.
Posted by Mad Hadder at 9:56 PM

That's so cool!! I would like to hear the real story of how they met, but I'm sure your made-up version would be equally enjoyable to read.

And for a somewhat random comment: Barack Obama is quite tall. I guess I never realized it because I usually see him standing alone or next to his wife, who also happens to be quite tall. I was so curious that I looked it up. Barack: 6 feet, 1-1/2 inches. Michelle: 5 feet, 11 inches. (Sorry for the randomness.)

oooh, very cool! It took me a minute to figure out who Hannah even was! The last image I have of her in my head is from when we were in high school wearing chucks and hoodies-she looks like such a woman!! What a great picture to have. Now I want to see some photos of that wedding (photoshopped slip and all!)