A Big Day for Norm 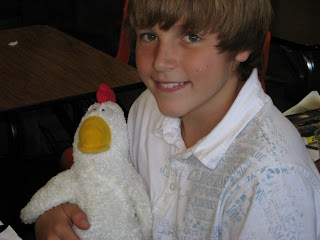 I found a ransom note in front of my classroom door last Wednesday morning. It read: "I have your chicken. Please leave cheese in the hall. Nyahaaaaaaaa. Thank you. Nyahaaaaaaaaaa."
My seventh graders were in a panicked uproar. Norm was gone! I posted a note in the hall that instructed the perpetrators to let my chicken go and not to harm him because he knew karate! Speculation ran rampant as to who had taken him and when the crime had taken place. How would we get him back?
"Can we page Norm over the intercom?"
"Do you have a key so we can go through all the lockers?"
"What if Norm is being tortured????"
An eighth grade girl was spotted during class changes with a large bulge in a coat she was carrying? Was that Norm struggling for breath???? All of a sudden a band of emotional 7th graders took the matter into their own hands. The next thing any of us knew the eighth grader had been jumped, her coat wrestled from her devious arms, and Norm came up for air! A brief tug-of-war, a couple of chicken pass-offs down the hall, and we had our beloved fowl back!!!! Oh, it was a glorious victory! Norm appeared none the worse for the wear--although future weeks may reveal some post-traumatic stress symptoms. He's shown here with one of his adoring rescuers. Are we going to press charges? Stay tuned!!!!!!!
Posted by Mad Hadder at 6:52 PM

poor norm I didnt even notice that we found him luckily for norm he didn't get hurt F: Keean Widmer PS. If u wanted to know my email is Gttrbg1@aol.com

This is kenna. Oh, my gosh! This is so funny! Was it Haiden Johnson??