That One Day China and I Had a Falling Out

In perfect keeping with the past 30 hours or so of my life, the blogpost that I wrote (and it was GOOD...sob) vanished into thin air--"like the poems I never wrote and the boys I never kissed".  I will NOT let the cosmos have the last word on this matter!  Let me re-begin this saga by saying that I try and go with the flow of things.  I'm a firm believer in putting out what you want to get back and vice versa.   So you can imagine my chagrin yesterday in Xi'an when I was caught sharp in the wake of an undeclared war against me by China!!  I was unarmed and blissfully unaware that China was even annoyed with me. Let me back up.  I had decided to take a solo travel voyage to sew doll clothes with my friend Diane in Xi'an.  It was a straight forward five hour bullet train trip which went swimmingly until I turned east to return to Beijing.  After being shooed to four different windows (and standing in four lines) when I attempted to buy a return ticket using the temporary passport document we've used ALL over China (sometimes China seizes our passports to update work visas), the last guy passed me a scribbled note with instructions in Chinese for a taxi or bus route to a police station for more documentation--essentially telling me my existing documentation was not cutting it!!!  What the???  I've flashed the exact same paper in numerous airports and train stations all over the country.  Why this one NOT, why NOW??  In a panic I called home.  Jerry passed the phone to Lee who speaks Chinese.  He made no headway, nor did the Chinese desk clerks at our building.  Then Jerry called an embassy friend from church.  I'm still contemplating his response--"Plant yourself and cause a scene."  My "scene" was apparently unmoving as well even though I emotionally repeated in my best Chinese, "English teacher!  Peking University!!" as I wrung my hands and threw myself into it!  And oddly enough none of my Xi'an hosts answered their phones either.  I was at my wit's end.
At this point my reason kicked in, and I determined that perhaps I ought to surrender myself to the police.  After ten taxis either refused to stop for me or drove away when I handed them the address, a villain entered my life. 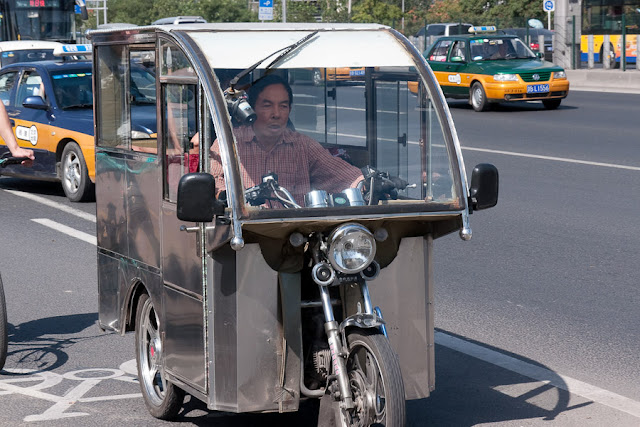 This is a tuk tuk.  They have three wheels and no meter, so you have to negotiate prices before the ride. They fancy themselves part car, part bike, part superhuman.  They are semi-illegal, but I was desperate.  This guy must have been watching my futile attempts to get a ride and then zoomed up behind me on the sidewalk for the kill.  We negotiated a bit, and then I squeezed in with another gal that we let off at a hospital.  He and I continued to zip up alleys, around corners, getting air here and there.  At least we were moving quickly.  Then he ground to a halt in front of a hostel.  I knew that wasn't it, but I got out and limped in retelling my tale of tuk tuk woe.  The hostel dudes sympathized, warned me never to do THAT again and gave me real directions to my destination.  I mentally thought the tuk tuk driver into a cornfield!  Ten blocks walking and 12 stops on a cramped bus later I arrived at the police station.  Then it was up 18 floors to what appeared to be complete desertion except for a bed and a TV!  Are you SERIOUS?????????  Fortunately, some angel policewomen appeared.  After an hour of interrogation, they summoned an uber car for me and even paid the fair just because I was having such a lousy day in their fair city!  Bless them.
This time around I shoved my passport paper in AND a phone number the police had given me.  Unreal?????????  All that for a phone number???  But it worked.  Only now, five hours had passed, and no tickets were available, so that is why I ended up 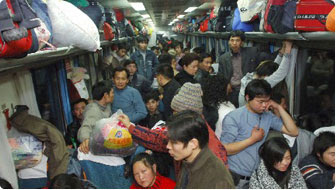 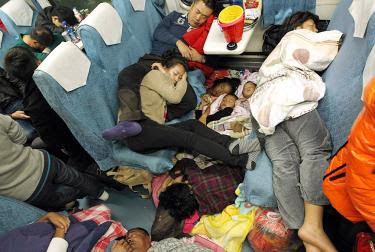 for 12 hours...
Highlights included (but were not limited to) the following: 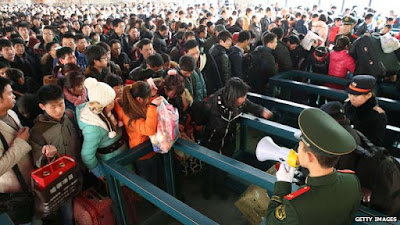 If you missed getting a ticket with a seat, heck!  Get on anyway!  Extras in the aisle, perching on sinks, sleeping on the floor in sleeping bags.

The twelve hours did pass.  I alternately nodded off a few times, tried to find something on my Kindle, stood by the bathroom where at least I wasn't shivering, nibbled at my Oreos (a nice supplement to the toast I'd had that morning), sipped my water, and contemplated my lowly place in the universe.  Eventually, the sun rose and the outline of Beijing appeared to the east.  The train stopped, and my new friend Qi (we passed four of the twelve hours in perfectly congenial conversation) and I lumbered off the train toward our subways--me to line 4 and she to line 1 and her job at the hospital as a...wait for it...neurologist.  Yes, Qi studied neurology at UPenn for five years, a bit of a stroke expert actually.  Only in China could one chance to meet a brain doctor on a cattle train.  If you're keeping score and thinking China is one up on me, think again.  Qi and I have a date for the National Library and may very well have used our train encounter to launch a friendship.  And so it goes...

W.o.w. I'm so glad you are okay! What an ordeal. China, you better watch yourself. That's my mom your messing with!!

Oh. My. That was horrific to read about. I can't imagine actually living it, or through it. The amazing Qi (I think that was the neurosurgeon's name) is your lovely silver lining. So happy you made it "home" at last.